Minnesota Conservative Billboard Trend Is Back With Gipper-Themed Highway Poster 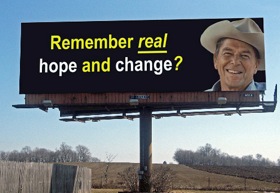 The Minnesotan billboard caper plot thickens. It took a few weeks of anonymity to discover the culprit’s of last month’s mystery, where a jovial George W. Bush waved at commuters on Interstate 35 with a caption asking “Miss Me Yet?” Turns out it was a few local businessmen looking to put a smile on drivers’ faces with a joke they found on the internet. This time around, however, it isn’t so much of a joke as a direct conservative message: “Remember Real Hope and Change?” it asks, with a picture of Ronald Reagan in a cowboy hat.

Ed Morrissey at Hot Air was the first to break the story, confirming the billboard was, in fact, not a photoshop job, and is currently placed alongside Interstate 94 in Minnesota. This poster does not seem to have any comical internet precedent, just a partisan message. It does seem to take on the aesthetic qualities of the ‘Miss Me Yet?’ billboard, seeming to point to the same team of businessmen as the ones behind the Bush poster.

The problem is, their designated representative claimed that their only intention in putting up the Bush billboard was to bring some levity to the political debate, although they did agree with some of Bush’s ideas. The reasoning behind this billboard seems much more ideological than the last. Minnesota is a strange choice for such a message. Sure, it is home to rabidly conservative Representative Michele Bachmann, but it also boasts Sen. Al Franken and Gov. Jesse Ventura among its political alums, and was the only state Reagan was unable to win during both of his successful presidential runs.

Discounting the original group of businesspeople behind ‘Miss Me Yet?’, there are no leads as to who is behind the billboard or why. Let’s predict it will take about four days for the patrons to take a victory lap with the Fox and Friends.