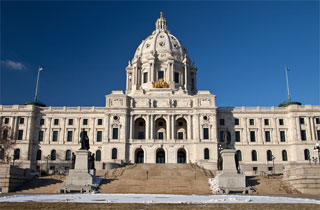 Minnesota’s state senators have a weird rule, a rule so bizarre that they attempted to get rid of it this week, but failed: they are not allowed to make eye contact while debating each other on the Senate floor, and instead must keep their eyes on the Senate president.

The Pioneer Press reported on the effort to strike the rule this week, along with another rule banning water from the chamber, maybe a holdover from a time when water was a likely source of dysentery and cholera, but a fairly dumb rule today. “I find this particular rule of the Senate, dare I say, antiquated,” Republican state Sen. Warren Limmer argued during debate.

His motion was struck down, 15-44, with a bipartisan majority in favor of not making eye contact with anyone else. As Senate Majority Leader Tom Bakk of the Democrat-Farmer-Labor party put it, making eye contact with any other Senator would make debates more personal, and “our decorum would probably not be as Senate-like as we would like to have it.” (He also was anti-water, saying that it would stain their desks.)

The no-water-no-eyes rule only applies to the Minnesota State Senate: over at the House, members are allowed all the water and eye contact they desire. (Hedonists.)

Maybe Minnesota’s senators are all just very shy. Maybe there’s a requirement stating that a Minnesota State Senator must have extremely weak ocular muscles. Or maybe there’s a dangerous, more arcane occurrence that the state founders wanted to prevent and the reason has been lost with time, such as: