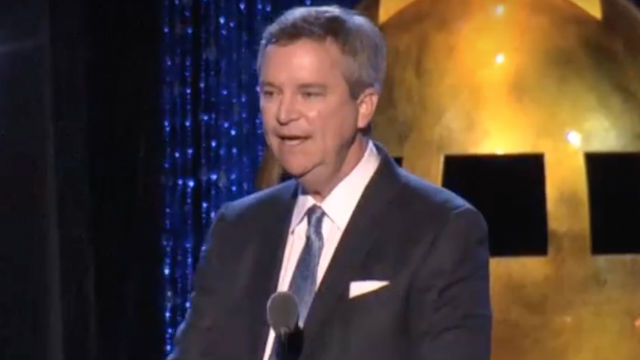 Just one day after an explosive report on disgusting comments made in emails by the CEO of the Miss America Organization, the board has voted to suspend him.

Yashar Ali‘s HuffPost report detailed slut-shaming and fat-shaming in emails sent and received by Sam Haskell, including one in which he responded “Perfect…bahahaha” to an email referring to former pageant winners as “c*nts.”

The report contains this tidbit about the response from the Miss America Organization:

HuffPost received a response from a Miss America Organization spokesman. He said [writer Lewis] Friedman had been let go from the organization after an investigation.

“The Miss America Organization Board of Directors was notified about the concern of inappropriate language in email communications several months ago. Consequently, the organization’s Board of Directors took the allegations of inappropriate comments very seriously and formed an investigative committee,” he wrote. “As a result of the investigation, the Board directed the organization terminate the relationship with most egregious author of inappropriate comments. In addition, the Board has started the process of instituting additional policies and procedures for communication.”

“The Board has full confidence in the Miss America Organization leadership team,” he added.

Today one board member announced her resignation, and dozens of former Miss Americas––including Gretchen Carlson––called on Haskell to resign.

Tonight the board has voted to suspend Haskell:

Statement from the Miss America Organization Board of Directors: pic.twitter.com/sd91CwJGhc

Carlson tweeted this in response to the announcement:

Apparently they don’t care about the 55 former Miss Americas (except the two on the board) who are calling for his immediate resignation along with complicit board members. #SaveMissAmerica https://t.co/1K3t3k0cMA

15. @samhaskell has issued a statement calling my story "unkind and untrue" and that it contains "a series of conveniently edited emails," but then he says "my mistake is a mistake of words."

I will now be publishing a story with ALL of the emails I have obtained. pic.twitter.com/aXA65JM9kQ