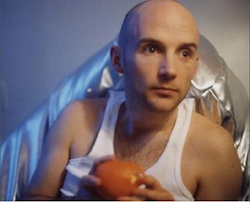 I’ve never been a huge fan of the Sunday Routine section of The New York Times: It’s self-indulgent, highlighting the lazy days of the rich NY celebrities that we already see too much on our television. Like did we really need to know that Padma Lakshmi spent a Sunday making herself a “bed picnic” in “crisp, clean” “WASP-y” Turnbull & Asser pajamas? No, I didn’t. This weekend defines for me the crux of its problem when it chronicled dorky vegan electronica musician Moby around as he complained about people who eat meat, not being able to sleep in, and making smoothies. Oy.

Some of the more ingratiating highlights from this week include self-identifying with Asperger’s Syndrome, a mild form of Autism, even though he doesn’t have it:

I’m a tea purist. I never understood adding sugar or milk to tea. And back when I drank alcohol, I drank straight vodka or tequila. I never liked anything added to them. It might be a function of Asperger’s
YOU HAVE ASPERGER’S?
No. I just like to pretend I do. It makes me sound more interesting.

He cares more about his cooking skills than pleasing a woman:

I had an ex-girlfriend; when we were breaking up — one of the few endings of a relationship that was a bit contentious — one of her parting shots was having her tell me she never liked my pancakes. I thought that was very cruel. Insult my sexual prowess, my intellect, but not my pancakes.

He is the worst, but at least he knows it:

When I was growing up, I was the most pretentious person I have ever met. I only read obscure books and watched obscure movies and only listened to obscure music. I was into Kant and Wittgenstein in college. Then 10 or 15 years ago, I discovered the joys of trash pulp culture. Anything that’s fiction is inherently trashy for me.