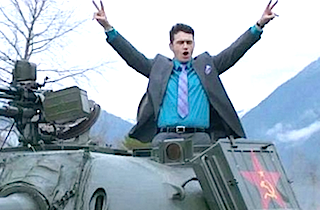 It’s time to bow down and welcome your new North Korean overlords, America, because apparently the terrorists have won.

After hacking a massive amount of embarrassing personal emails and serious private information from Sony Pictures computers, the Guardians of Peace (or GOP) group decided to issue more than a cyber-threat by promising 9/11-style attacks on movie theaters that show the Seth Rogen–James Franco buddy comedy The Interview this Christmas. 24 hours later, the top five American movie chains have said they will not be showing the film.

This is a travesty, not only for comedy fans who are excited to see the next film from the people who brought you Pineapple Express and This Is the End, but mostly for all Americans who don’t want to see our society dictated by vague, unsubstantiated terrorist threats.

The premise of The Interview — the thing that made North Korea deem it an “act of war” — is that two hapless American journalists, played by Franco and Rogen, are tasked with assassinating Kim Jong-un. And now, thanks to those Sony leaks, we know that (spoiler alert!) they go through with it.

In fact, emails between Rogen and Sony co-chair Amy Pascal show that Sony Corp. Chief Executive Kazuo Hirai wanted the filmmakers to tone down a certain head explosion, but Rogen held firm and only agreed to slight adjustments.

“The head explosion can’t be more obscured than it is because we honestly feel that if it’s any more obscured, you won’t be able to tell it’s exploding and the joke won’t work,” Rogen emailed Pascal after one round of edits. “This is now a story of Americans changing their movie to make North Koreans happy. That is a very damning story.”

Yes, that would have been a damning story, but Pascal deserves credit for sticking by the film and agreeing to release in the first place. Before the L.A. premiere last week, Rogen publicly thanked her for “having the balls” to do so. In an interview about the Sony hack, Pascal insisted, “No one will tell us what movies to release, ever. Nobody should be able to intimidate a company to not to do its business.”

But that was before the threats of violence were sent to media organizations. The “terrorists” wrote:

We will clearly show it to you at the very time and places “The Interview” be shown, including the premiere, how bitter fate those who seek fun in terror should be doomed to.
Soon all the world will see what an awful movie Sony Pictures Entertainment has made.
The world will be full of fear.
Remember the 11th of September 2001.
We recommend you to keep yourself distant from the places at that time.
(If your house is nearby, you’d better leave.)
Whatever comes in the coming days is called by the greed of Sony Pictures Entertainment.
All the world will denounce the SONY.

And with that, Sony pulled back, canceling all press appearances by Franco and Rogen, including what was sure to be a fun joint appearance on The Tonight Show Starring Jimmy Fallon tonight. Now, because North Koreans, or those sympathetic to their cause, don’t like what’s in The Interview, its stars can’t play fun games with Jimmy Fallon on late night TV.

But today’s news that America’s biggest movie theater chains would not be showing The Interview hit the hardest. The entire point of the film — aside from pure, silly humor — is that it calls out the megalomania of a dictator who oppresses his people and bans dissent. By refusing to show the film, the theater owners are succumbing to the threats and appeasing a regime that doesn’t want anyone to see an actor playing its dear leader get his head blown up with special effects.

And if the theater owners say they are doing it for purely capitalistic reasons, they’re lying. Yes, if there really was a deadly attack on a movie theater, it would be bad for the industry as a whole. But until individual threats are confirmed by the FBI, there is no compelling reason to believe they are real. And with the amount of publicity the hackers have unwittingly given this film over the past few weeks, it was destined to have a massive opening weekend, threat or no threat.

It takes extraordinary circumstances for a liberal like me to agree with someone like Rep. Peter King (R-NY), but there was a lot to like in his comments about the threats on CNN’s The Situation Room with Wolf Blitzer last night.

Congressman King admitted he’s not a “big movie guy” and normally would have no interest in an R-rated comedy starring Rogen and Franco. But now that the threats have been made, he said he just might check it out this Christmas as an “act of defiance.” Unfortunately, it doesn’t look like he’ll have the chance.

Without anywhere to see the film, many have speculated that Sony will choose to release it on demand for people to watch at home on the same day it would have been released in theaters. That would be a welcome consolation, and would almost definitely become the highest-grossing VOD release of all time. But it would also be a sad admission that Americans were frightened out of going to the movies to see what is, at its heart, a silly comedy. Comedies like this one are always best-experience in crowds, but now that won’t be possible for most viewers.

Despite the valiant efforts of some activists, The Interview could never be shown in North Korea. The fact that it now can’t be shown in this country proves we’re not quite as free as we claim to be.

Watch the final trailer for The Interview below and hope it’s not all you get to see of the film:

UPDATE — 5:20 p.m. ET: Apparently, I expressed my outrage before the worst of this story hit. Sony Pictures has now decided to officially cancel the theatrical release of The Interview altogether. The company’s statement still leaves the possibility of a VOD release open, but the chances are looking slimmer by the hour.