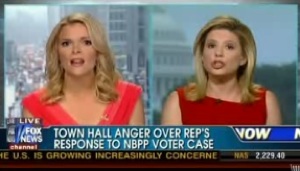 Megyn Kelly and Kirsten Powers got into a remarkably heated battle today over the merits of the case against the New Black Panther Party intimidating voters outside of Philadelphia and more to the point, the case’s dismissal by the Justice Department. In the following segment, Kelly aired amateur footage of Congressman Brad Sherman (D-CA) admitting during a Town Hall meeting that he was not aware of this case, leading to audible cries of disbelief from his constituents. She then followed with a panel discussion about the case at large with Andrea Tantaros and Powers…and then all hell broke loose. To fully appreciate, you must watch the video after the jump.

First of all, there is a lot to unpack in the context and background to this story. It really started when Megyn Kelly interviewed a DOJ whistleblower J. Christian Adams who had alleged that, among other things, the DOJ has a policy of not pursuing cases if the defendant is black and victim is white.

Since that story initially broke on Fox News, it has mostly been covered by right-of-center media outlets, though Mediaite’s Tommy Christopher did ask Press Secretary Robert Gibbs about it last week. During a recent interview with Attorney General Eric Holder, CBS News’ Bob Schieffer did not ask about this case, which earned the scorn of opinion media journalists on Fox News as well.

There is a reasonable debate to be had about the merits of this story, as it’s played out in the media. It is true that, for the most part, its pretty much been exclusively covered by right-of center media. And while the Department of Justice has claimed that they are investigating the allegations made by Adams, an “investigation” could mean that there was some illegal or imprudent activity, but it also doesn’t necessarily mean that there is any merit to the case.

After Tantaros claimed that “it’s terrible” that an elected official (Sherman) ‘would play dumb,’ and riffed on some rather predictable conservative talking points, Kelly turned to Kirsten Powers (a former Democratic strategist who is now also a political columnist for the NY Post) and opened with the following exchange (rough transcript due to the cross-talk):

Kelly: We have a DOJ whistleblower alleging there is a discriminatory policy at the DOJ voting rights section and no one seems to give a darn.

Powers: I’m sorry you can put me in the same category of people who don’t give a darn. I looked at the video. the guy wasn’t really intimidating people. They were walking past him and voting. I don’t understand how he’s being intimidated.

Kelly: With respect — you don’t seem to know what you are talking about.

Powers: I think I do…

Kelly: I have read the testimony that was given before the U.S. commission. have you read —

Powers: I talked to the Department of Justice at length about this. It doesn’t matter, they got an injunction against him.

Kelly: You don’t know what you are talking about. You cannot debate.

Powers: You won’t answer my question.

Kelly: What is your question?

And so it went, until it got to remarkably uncomfortable levels not normally seen on any cable news program. Kelly and Powers appeared to hold each others position in very low regard, replete with accusations of “you don’t know what you are talking about,” “this is not effective!” and “that’s your response?” amid shouts over one another and a least one threat of cutting one’s microphone. For her part Kelly held court, while Powers (appropriately?) played the race card with allegations of playing “the scary black man thing.” Powers held her own but seemed to be somewhat emotionally shaken by the intense level of confrontation.