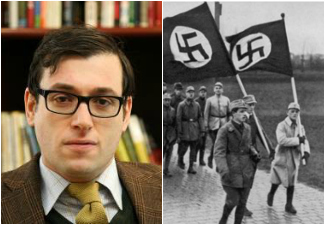 Is it ego or just plain stupidity?
That’s the question for anyone and everyone in the media business right now … especially upon witnessing what feels like the 794th time a reporter, host, anchor, guest, writer, producer, PR exec feels the need to Tweet out a thought, an image (or both in this case) that he or she absolutely, positively KNOWS (and I never use CAPS to make a point) that it’s ill-advised, wrong and potentially career ending act.

Today’s latest example comes courtesy of Newsweek senior writer Alexander Nazaryan. His crime? Tweeting out an old image of people marching with Nazi flags and sporting swastikas to illustrate what he calls “Ted Cruz’s ground game.” In other words, if you support Cruz, you advocate the genocide of Jews with fascism being your particular political flavor.

Take ideology or whom you’re rooting for in the presidential race out of this for a moment (if humanly possible): If you’re a reporter — traditional, impartial, editorial … doesn’t matter — how can you be so dense, so reckless, to characterize a presidential candidate’s supporters as Nazis? Alcohol is always a possibility — and this Tweet was sent in the early morning, so there’s a 51 percent chance he wasn’t sober — but what exactly — lucid or not — compels someone like Nazaryan to come to the conclusion that sending that out to his thousands of followers would end well? Because the Nazi comparison in American politics never, ever has a happy ending for the messenger.

As I write this, I realize what the answer to my original question: Is this is an act of stupidity or ego? Answer: The latter. Because know this: Nazaryan is a Dartmouth graduate. He’s not a kid in his 20s new to the business. He was even once on the editorial board of the New York Daily News before moving to Newsweek. So he’s clearly not an idiot or remotely close to it (on paper, anyway).

OK … So stupidity is out. Instead, this is all about unabashed ego. It’s also about Nazaryan already knowing he’s above the law — or in this case, his editor — because it appears no suspension is coming. Instead, this is the limp statement that comes from Newsweek Editor Jim Impoco on the matter:

“He has since deleted the tweet and I would like to express on behalf of Newsweek our disappointment that this occurred and reiterate that this does not align with our editorial values. I apologize for any doubt that this might have cast on Newsweek’s editorial integrity or credibility. We’ve addressed the situation with Alexander and the rest of the staff and will be reviewing and reiterating our social media policy in coming days.”

Yup … deleting the Tweet is extremely helpful, because a screen shot wasn’t taken by dozens of others already to help it live forever. Mr. Impoco also offers no apology to Cruz or his supporters … only showing remorse for “doubt that this might have cast on Newsweek’s editorial integrity or credibility.” Gimme a break. Seriously. That statement from Impoco is about as limp and lame as it gets when it comes to illustrating zero backbone in terms of true accountability (he should have announced Impoco’s suspension or termination right there instead).

So did Nazaryan eventually apologize? You be the judge about the remorse oozing from this Tweet:

I deleted my tweet calling Ted Cruz a Nazi. Not fair to his totally decent supporters, as much as I dislike the man himself.

“…as much as I dislike the man himself.” Good grief. This moron (a word I rarely use to describe anyone) simply does not understand how sophomoric he appears in still attempting to justify his actions under the guise of a so-called apology. It’s honestly utterly flabbergasting. And guess what? From all appearances and if that apology is any indication, there’s no punishment coming because his editor — courtesy of his absent apology to Cruz and his supporters — gives the impression he agrees with the Nazi Tweet. And for those who argue Newsweek may be handling this internally, Nazaryan (an ironic last five letters to the name, don’t you think?) has been tweeting away since said apology as if nothing happened. Because nothing will happen…

Meet Alexander Nazaryan, the first of another long, long line of condescending narcissists in 2016 who will help bury whatever is left of any credibility or integrity this increasingly-unintentionally-comical industry has left.