Nevada Rancher Cliven Bundy Goes Off About ‘The Negro’ 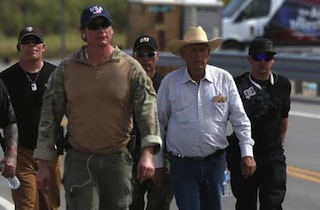 Cliven Bundy, the Nevada rancher who’s been squaring off against the Bureau of Land Management over his two decades of illegal grazing on federal land, was quoted in the New York Times Wednesday evening giving his impressions of “the Negro.”

“And because they were basically on government subsidy, so now what do they do?” he asked. “They abort their young children, they put their young men in jail, because they never learned how to pick cotton. And I’ve often wondered, are they better off as slaves, picking cotton and having a family life and doing things, or are they better off under government subsidy? They didn’t get no more freedom. They got less freedom.”

He’s here all week, folks. His Republican supporters may not be, however: after the comment, Senator Dean Heller (R-NV) condemned the remarks and Texas gubernatorial candidate Greg Abbott backed away from Bundy. (Senator Rand Paul’s (R-KY) office said Paul was “unavailable for comment.”)

UPDATE 8:51 a.m.: Paul denounced the comments in a statement: “His remarks on race are offensive and I wholeheartedly disagree with him,” he said.