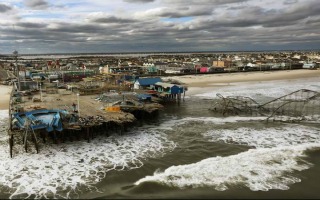 After incurring the wrath of a number of New York and New Jersey lawmakers for failing to vote on an aid package for states impacted by Hurricane Sandy in the final days of the 112th Congress, the House passed a relief bill on Friday morning by a 354-67 vote.

The $9.7 billion deal is smaller than the $60 billion package passed by the U.S. Senate, but this just the first vote on Sandy-related aid packages. House Speaker John Boehner (R-OH) has promised a January 15 vote on a bill that could yield up to $51 billion in additional aid for areas hardest hit by the October, 2012, storm.

The 67 “no” votes against this package were cast exclusively by Republicans. Rep. Jeb Hensarling (R-TX) told The Hill that aid packages like this should not be passed without means to pay for them built into the bill.

“Emergency bills like this should not come to the floor without offsets to pay for it, or structural reforms to ensure that taxpayer bailouts are never needed again,” Hensarling told The Hill .

New Jersey Gov. Chris Christie, the Republican Party’s keynote speaker at their 2012 presidential nominating convention, tore into Speaker Boehner on Wednesday for the House’s inability to pass the Senate’s version of a Sandy relief package. “Shame on Congress,” Christie said. He called the House’s failure to act on the bill immediately a spectacle which was “disappointing and disgusting to watch.”

Republicans in the House balked at a number of provisions in the original bill which were unrelated to Sandy relief – including funding for the Smithsonian Museum and for Alaskan fisheries.