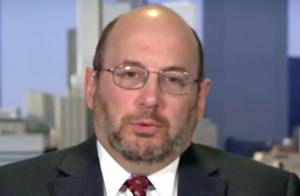 In two separate tweets, Newsweek‘s Kurt Eichenwald gave two seemingly contradictory explanations of when he contacted police over a tweet from an alt-right critic that was intended to give him a seizure.

On Thursday night, someone identifying themselves as Eichenwald’s wife posted to his account that they had called the police and reported an assault.

@jew_goldstein This is his wife, you caused a seizure. I have your information and have called the police to report the assault.

On Friday, Eichenwald likewise suggested that police were already involved and taking an active role in the matter.

…identity of the individual who engaged in this cross-state assault. At this point, the police are attempting to determine if this is…

…a federal crime because it appears to be cross state. This kind of assault will never happen again without huge consequences. This…

But The Daily Caller reported Monday that they had reached out to police in Dallas (where Eichenwald lives), and they had no record that he had filed any complaint. “The Dallas Police Department told TheDC that there is no police report from those dates from either Eichenwald and that they cannot have an investigation without one,” they reported.

Eichenwald hit back at The Daily Caller the following day on Twitter, saying  that he actually had filed a complaint, but it was filed on Monday. He claimed further that the police division responsible for handling his kind of case was closed on Thursdays, Saturdays, and Sundays.

Reflecting their journalistic standards, @PfeifferDC said story not wrong cause it only said no complaint had been filed Thursday or Friday.

Somehow, @PfeifferDC was unable to determine that the police division responsible for this kind of case was closed Thursday and all weekend.

But the piece’s author Alex Pfeiffer shared a screenshot on Twitter of a Dallas police representative confirming that there was no new complaint on Monday either.

Eichenwald had an explanation for that as well (calling Pfeiffer a “dickhead” for good measure), saying he filed the complaint online. (UPDATE: The tweet has since been deleted.) 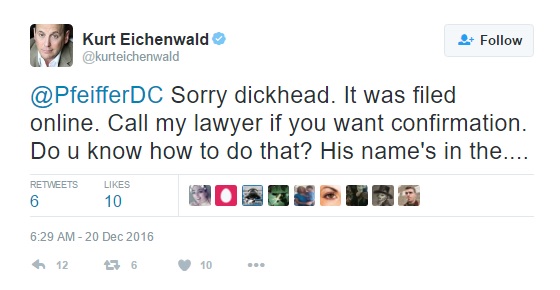 Mediaite has reached out to Eichenwald to gain a better understanding of the timeline. This piece will be updated when he responds.