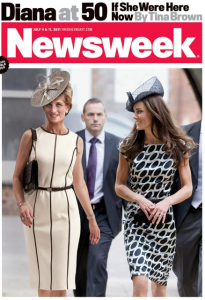 Oh, Newsweek. Oh, Tina Brown. Did you really have to do this?

In honor of Princess Diana’s would-be 50th birthday (if not for, you know, her death) Tina Brown wrote an article called, “Diana at 50: Chilling with the Middletons. Tweeting from Davos. And still the people’s princess. If not for that tragic night, what her life might look like now.” And yeah, that about sums it up.

In many ways, Brown’s approach is understandable. Princess Diana was a beloved public figure. She was idolized and worshipped. Her death was devastating: an abrupt tragedy. But, it happened. To pretend like it didn’t is disrespectful on so many levels.

For me, the pictures are what makes the article the creepiest. Almost every news outlet that covered the royal wedding posed the inevitable “what would it be like if Diana were here” question. But they didn’t create a hologram of her to include her in the proceedings. The cover image of Diana and Kate Middleton really is impressive photoshopping, but I almost expect Diana to have white zombie-esque eyes. 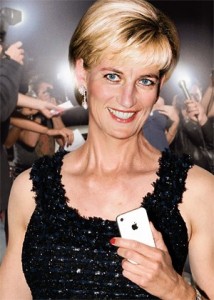 Similarly, photos of her with an iPhone are borderline disturbing. You can almost imagine the Newsweek people contemplating whether they should try to digitally age her to make the article more real. Oh, but according to Brown, Diana would have kept herself up: “Fashionwise, Diana would have gone the J.Crew and Galliano route à la Michelle Obama, always knowing how to mix the casual with the glam. There is no doubt she would have kept her chin taut with strategic Botox shots and her bare arms buff from the gym.”

Brown ends on a note that ends up being a little confusing, discussing how Prince William brought Kate to his mother’s grave before their wedding.

But perhaps more than any gesture of significance, in the days before the wedding ceremony, William took Kate on a sacred trip to Althorp to visit Diana’s grave on the island in the lake. He had waited all these years to do it, showing his wife-to-be that Diana still lives and is vibrant in his memory. And in ours.

But, wait. Haven’t we just been looking at all these pictures of Diana living it up in 2011? You mean she didn’t retweet the Dali Lama?

Maybe Brown should have reread her last paragraph and rethought the article. Yes, Diana is alive in our memories. She isn’t walking with Kate Middleton, posing for the paparazzi, and tweeting. That is sad, but it’s more devastating to pretend like she is. To create photographs that simulate a bizarre alternate reality is hurtful, especially to her children. 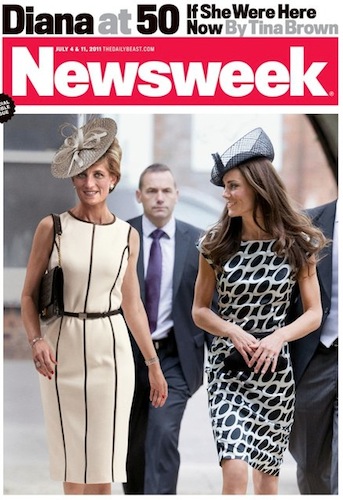