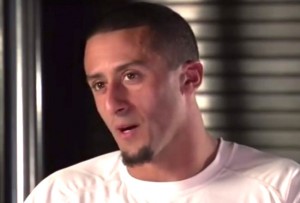 San Francisco 49ers quarterback Colin Kaepernick got into a spot of trouble last year when he made a joke that used a photo of the devastating Houston flood. Now, the player is under scrutiny again, but this time, it isn’t for being insensitive to someone’s plight. In fact, it’s for being the exact opposite.

He refused to stand for the national anthem last night during a pre-season game against the Green Bay Packers in protest of racism and police brutality. Here’s what he told NFL media about that:

I am not going to stand up to show pride in a flag for a country that oppresses black people and people of color. To me, this is bigger than football and it would be selfish on my part to look the other way. There are bodies in the street and people getting paid leave and getting away with murder.

Here is what his team said:

The national anthem is and always will be a special part of the pre-game ceremony. It is an opportunity to honor our country and reflect on the great liberties we are afforded as its citizens. In respecting such American principles as freedom of religion and freedom of expression, we recognize the right of an individual to choose and participate, or not, in our celebration of the national anthem.

His protests come after a summer that included the deaths of Alton Sterling, Philando Castile, and Korryn Gaines at the hands of police, all of which sparked renewed conversation on the topic of police brutality.