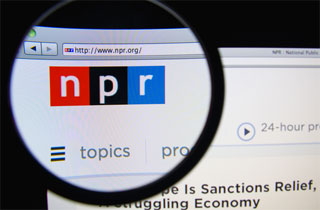 In an email sent to staffers today, a National Public Radio executive announced that the station was cutting 28 positions, as well as ending a popular program, Tell Me More, on August 1st.

“These hard choices are part of a plan that restructures the newsroom for the future,” Margaret Low Smith, senior VP of News, told staffers. “While we have cut positions, we’re also creating new ones to strengthen our coverage and better serve the audience.”

As part of the round of cuts, 20 staffers will be laid off, while eight open positions will not be filled. Most of the cuts will come from Tell Me More, as well as in the News Division and in the Library. Michel Martin, the host of Tell Me More, will continue to work at NPR, as well as a core group of her team from the program.

According to Low Smith, the cuts are only a small part of “other [changes] we are making throughout the newsroom”:

Our aim is to build editorial hubs that combine the digital and audio skills of reporters, editors, producers and bloggers around specific areas of focus.

We are creating a new News Desk to serve as the hub for breaking news and quick turn-around stories. This will bring together two units that already coordinate naturally: our Two Way news bloggers and our newscasters. We will turn our Washington Desk into another multiplatform hub committed to original and enterprise reporting on politics and policy. We will also combine the radio and digital teams covering the arts into a hub for Arts and Culture.

These new hubs will join those that are already up and running, such as our newly launched Education team and our Global Health and Development hub.