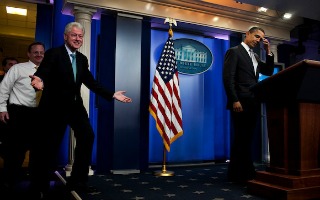 New York Times reporter Matt Bai has an eyebrow-raising report in Wednesday’s “The Caucus” section which challenges the most reliable conventional wisdom of the 2012 campaign. In his report, entitled “How Bill Clinton May Have Hurt the Obama Campaign,” Bai obliterates the assumption that former President Bill Clinton’s advice in support of President Barack Obama may have been more of a curse than a blessing.

Bai writes that it was Clinton’s advice for the Obama campaign to focus on “defining” Republican presidential nominee Mitt Romney as a divisive and extreme conservative in the mold of the House Tea Party Caucus.

[I]t was Mr. Clinton who forcefully argued to Mr. Obama’s aides that the campaign had it wrong. The best way to go after Mr. Romney, the former president said, was to publicly grant that he was the “severe conservative” he claimed to be, and then hang that unpopular ideology around his neck.

Mr. Clinton counseled that independent voters might forgive Mr. Romney for having said whatever he had to say to win his party’s nomination, but they would be far more reluctant to vote for him if they thought they were getting the third term of George W. Bush. Ever since, the Obama campaign has been hammering Mr. Romney as too conservative, while essentially giving him a pass for having traveled a tortured path on issues like health care reform, abortion and gay rights.

Rather than position himself as a centrist willing to compromise with the resurgent Republican party after the 2010 elections, as Clinton had when Republicans took control of the Congress in 1994, the Obama campaign opted to attempt to define their opposition as arch-conservatives. They gambled that the country would appreciate President Obama eschewing compromise so long as a majority of voters were afraid of the Republican agenda.

It was a gamble that was paying dividends until October 3, when the first presidential debate undid months of work by the Obama campaign. The Real Clear Politics average of both candidates’ favorability/unfavorability ratings illustrates this phenomenon perfectly – Mitt Romney now enjoys a 2.2 percent favorability advantage over President Obama. 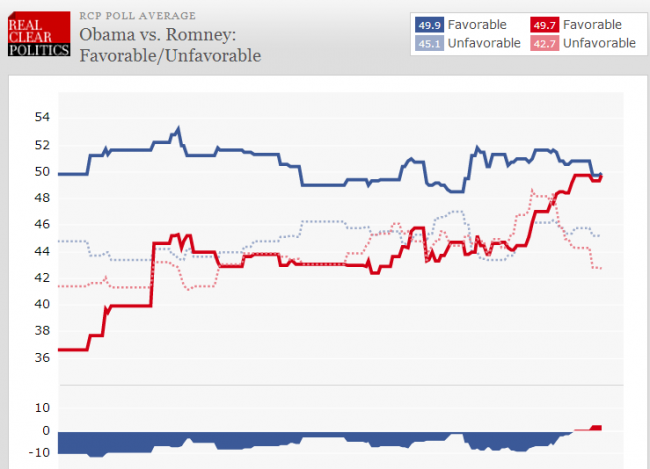 As that initial strategy appears to be in near-collapse, the Obama campaign is not recalibrating but shifting blame.

Commentary Magazine columnist Jonathan Tobin finds this absolution of the Obama campaign from blame for a potential loss to be self-serving and possibly even Chicago-approved:

This is clearly intended to absolve the anonymous Obama aides for making a decision that they — and the president — must have signed off on before it was implemented. Bai goes to great lengths to take them off the hook, and even compares their position to a ballplayer who would reject advice from Derek Jeter. In other words Bai is saying that anyone, even really smart political operatives like those working in Obama’s Chicago headquarters, or the top guys themselves like David Axelrod or David Plouffe, had no choice but to bow to the 42nd president’s wisdom.

With 12 days left in the campaign, it is far too early for the eulogies of either campaign to be written – let alone for blame to begin being assigned. However, savvy political observers from Ross Douthat to A.B. Stoddard have begun to view the president, with its focus on inartful comments by down-ballot Republicans and a “second term agenda” that is more of a defense of his first term’s accomplishments, as running a losing campaign.

Blaming the most popular living Democrat for the potential collapse of the Obama campaign is the latest indicator that reporters are attuned to the perception that the president is heading towards defeat.