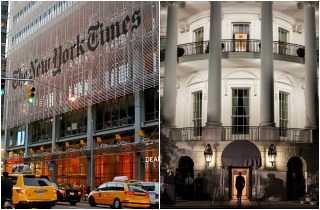 American conservatism is a unique ideological movement in the Western world.

Unlike European conservatism, which maintains a strain of progressivism that the American right largely shrugged off about a century ago, modern American conservatism is a philosophy marked by a deep and abiding mistrust of man’s ability to control events and accurately prescribe remedies for societal ills. It is an ideology acutely aware of its own limits and the limits of others. As a result of this humility, conservatism in the United States preaches decentralization, checks on authority, and constraints on power lest the public be subject to the tyranny of good intentions.

This definition of conservatism would be utterly alien to a regular reader of the New York Times’ opinion pages. With the possible exception of Ross Douthat, each of the Times’ “conservative” writers can only be described as conservative in its most Rooseveltian sense. The Times’ conservative is a progressive Republican who subscribes to an ideology which is convinced of its own intellectual superiority and beneficence. Further, he appears to perceive himself to have a mandate to remake the world for the good of the many, insofar as he understands the many.

The Times provides its readers with nearly daily examples of their preferred vision of conservatism. Today’s comes from conservative columnist David Brooks who, in an effort to tackle the problem of congressional gridlock during periods of divided government, has identified a solution to America’s many woes: Grant even more unchecked authority to the executive branch.

After taking a stroll through the Congressional Budget Office with a verity of moribund economists, Brooks drops a dime of knowledge on his audience: Government dysfunction and an out-of-control executive is, counter-intuitively, even more reason to augment presidential authority.

Brooks rattles off a series of reasons why, in his opinion, Congress is hopelessly beholden to interest groups at the expense of members’ constituents, and how the institution of the legislature itself has sprawled so much that it is perhaps irrevocably unwieldy and unresponsive.

“It’s a good idea to be tolerant of executive branch power grabs and to give agencies flexibility,” Brooks suggests. “We don’t need bigger government. We need more unified authority. Take power away from the rentier groups who dominate the process. Allow people in those authorities to exercise discretion. Find a president who can both rally a majority, and execute a policy process.”

This window into a confounding mindset proves a point made in an earlier post: the press, by and large, is less biased towards the agenda of any individual political group than it is towards activist government. Brooks doesn’t care who is in charge, so long as the wheels are turning at maximum efficiency. And if it takes something just shy of a monarch to accomplish this noble goal, so be it.