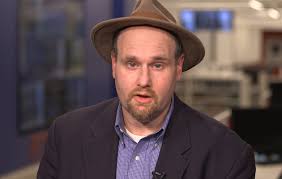 Another day, another Washington power player embroiled in a sexual misconduct scandal.

The New York Times, on Monday, announced the suspension of one of their star White House Correspondents, Glenn Thrush, following the publication of a report by Vox which chronicled multiple allegations of unwanted advances, kissing, and groping. The report’s author, Laura McGann, claims to have been a victim herself.

The full report features damning text messages and email exchanges. It also details an incident which occurred on June 15, in which Thrush allegedly kissed a female journalist in her 20s against her will while they were walking to Georgetown.

In a statement to Vox, Thrush did not own up to any specific indiscretions, but did offer an apology.

The June incident [described above] was a life-changing event [for me]. The woman involved was upset by my actions and for that I am deeply sorry.

Over the past several years, I have responded to a succession of personal and health crises by drinking heavily. During that period, I have done things that I am ashamed of, actions that have brought great hurt to my family and friends.

I have not taken a drink since June 15, 2017, have resumed counseling and will soon begin out-patient treatment for alcoholism. I am working hard to repair the damage I have done.

In a statement put out by Times spokesperson Eileen Murphy, the paper announced its suspension of Thrush, along with his decision to head to rehab.

“The behavior attributed to Glenn in this Vox story is very concerning and not in keeping with the standards and values of The New York Times,” Murphy said. “We intend to fully investigate and while we do, Glenn will be suspended. We support his decision to enter a substance abuse program.”

Full statement from Glenn Thrush on the allegations that got him suspended pic.twitter.com/NvduNQP5fa

UPDATE: 11:54 a.m. ET: An MSNBC Spokesperson tells Mediaite “We’re awaiting the outcome of the Times’ investigation. He currently has no scheduled appearances.”