Obama on Gun Violence: No Other Developed Country Would ‘Put Up’ with This 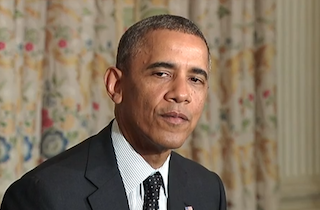 Tumblr CEO David Karp came to the White House on Tuesday to host a town hall event that mostly focused on student debt. But President Barack Obama did field one question from a student at UC Santa Barbara that concerned how his administration plans to tackle to scourge of gun violence in this country.

Obama described the resistance to expanding background checks for gun purchases his “biggest frustration” as president, adding, “There is no advanced developed country on earth that would put up with this.” While he said he “respects” gun rights, he lamented the fact that Congress could not pass a bill strengthening gun laws following the Sandy Hook Elementary School shooting.

“People ask me what I’m proudest of and what are my biggest frustrations as president,” Obama said. “My biggest frustration is that this society hasn’t been willing to take some basic steps to keep guns out of the hands of people who can do damage. We’re the only developed country where this happens. And it happens weekly. Our levels of gun violence are off the charts.

“If public opinion does not demand change in Congress, it will not change,” he said. He said the country needs to do some “soul searching” on the issue in order to alter the status quo.

Since the Newtown, Connecticut shooting occurred in December 2012, there have been 74 instances of gun violence on school campuses in the United States.

Watch the clip containing Obama’s comments below, via CNN: