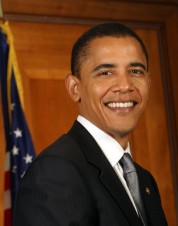 Much has been made in the past week about the fact President Obama’s approval rating has dipped below 50% for the first time, but here’s another take on those numbers courtesy of Richard Prince at the Maynard Institute. Turns out, what you’re not hearing a ton about in the media is that when the Gallup numbers are parsed Obama’s ratings have only really fallen significantly with white people.

For Nov. 16-22, Obama’s white approval rating fell to 39 percent, but it was 73 percent among nonwhites. It was 91 percent among blacks and 70 percent among Hispanics. The sample for Asian Americans and Native Americans was too small to measure.

Any number of things can be read into these results, and it perhaps should be noted that black and Hispanic voters, at 33%, make up less of the voting population (though, Hispanics are very much on the rise, as followers of last year’s election surely know). Moreover, black and Hispanic support is also down in the last month to the tune of 3% compared to 5% for whites. However, it does signify a interesting and seemingly widening racial divide in support for the President. It also brings to mind this much-chattered about post by the Atlantic’s Marc Ambinder, who wrote about the results of a study examining how voters view a candidate’s skin tone.