On Gitmo, Obama Is Stuck Between Code Pink And Fox News
VIDEO

On Gitmo, Obama Is Stuck Between Code Pink And Fox News 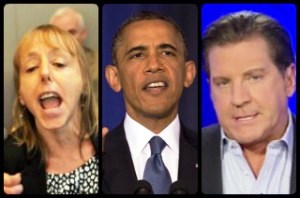 President Obama delivered his highly-anticipated, major, hour-long speech on his administration’s counterterrorism policies yesterday, and as usual, he’s taking it from all sides. The first criticism of his speech, which included both a defense of drones and an expressed desire to curtail their use as well as a plan to address the DOJ’s leak investigations, came before it was even over. Just as the president was beginning the final section of his address, in which he called for renewed action on his long-stated goal of closing the prison at Guantanamo Bay, a protester from the the left-wing activist group Code Pink stood up and started shouting that he should close it immediately. But just hours later, Obama was getting hammered from the right by Eric Bolling and other Fox News pundits for not being strong enough on “terror.”

Before he was interrupted, President Obama began making the argument that the justification for Gitmo has been found “unconstitutional” and the only thing standing in the way of its closure is a restriction imposed by Congress to “effectively prevent us from either transferring detainees to other countries or imprisoning them here in the United States.” The line that drew applause and prompted Code Pink’s Medea Benjamin to make her move was: “There is no justification beyond politics for Congress to prevent us from closing a facility that should have never have been opened.”

During an interview on CNN today, Benjamin rejected the notion that Obama couldn’t just free the 86 prisoners who have been cleared for release. She described a “waiver system” that allows the president to circumvent Congress and release detainees to other countries, but neglected to mention the provision that says a senior administration official must pledge that the country can ensure the detainee will not engage in acts of terror against the U.S. in the future. That’s a guarantee that members of the Obama administration or any foreign regime would have great difficulty making. And the political ramifications for Obama and his team if a released prisoner did attack the U.S. or its interests would be devastating.

A big reason why those political risks exist is the enormous reluctance of lawmakers on both sides of the aisle to have Gitmo detainees transferred to supermax prisons in their home states. But another reason can be summed up by what Fox News’ Eric Bolling had to say in response to President Obama’s speech on The Five yesterday afternoon.

After an in-depth, complex speech in which Obama laid out the history of the country’s counterterrorism strategy since 9/11 and how he hoped to move forward, Bolling heard only the president’s reluctance to use Bush era terminology. “He could not say there’s a war on terror,” Bolling declared.

In fact, the president addressed this issue directly, saying, “we must define our effort not as a boundless ‘global war on terror,’ but rather as a series of persistent, targeted efforts to dismantle specific networks of violent extremists that threaten America.” While Obama is trying to move beyond the simplistic notion that we must be constantly engaged in an endless war all over the globe, Bolling appears to want to keep things exactly as they are. This extends to Gitmo, which Bolling, and much of the right, view as, at best, necessary evil and, at worst, a justified solution.

“He will not say that we are in a war on terror,” Bolling said, “because if he did, we could do things like send enemy combatants to Gitmo.” So while Obama has someone like Medea Benjamin arguing he should close the prison today, he also has people like Eric Bolling screaming to millions of people on Fox News that he’s not using the facility to its full potential.

Watch Bolling’s comments on The Five below, via Fox News:

These attacks from the left and the right demonstrate what makes the Gitmo issue such a difficult one, and why four years after President Obama first signed an executive order to close the facility it remains open for business. If closing Gitmo within his first year in office was an easy proposition, he would would have closed Gitmo within his first year in office. But unfortunately, as often happens with difficult issues like this one in Washington, extreme voices promoting their views on either side have resulted in inaction.

If President Obama continues to be pulled in opposite directions by Code Pink and Fox News, and is unable to take the reasoned, feasible, necessary steps he needs to take, the prison at Guantanamo Bay will remain open indefinitely. That’s a fate that would not only be unacceptable for the hundreds of detainees being held there without any form of due process, but also for an American society that believes in justice.