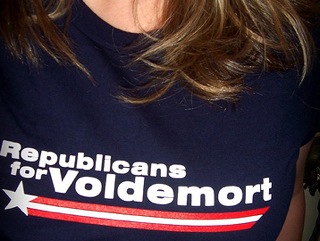 In a breakthrough study whose results will shock absolutely no one following the Congressional budget wars, campaign finance research group Open Secrets has found that He Who Must Not Be Named is a far more influential donor to candidates in federal elections than his nemesis, Harry Potter. The group found the amount of money “Harry Potter” and “Tom Riddle” have been pouring into campaigns, and found the latter outspending the former on the federal level.

Open Secrets released its results last week in anticipation for the premiere of the eighth Harry Potter film, discovering that five Tom Riddles had donated $11,825 to various federal candidates, compared to the $11,400 donated by two Harry Potters. Fans of the books, of course, will recall that, as a minor, much of Potter’s money was kept in a vault out of reach, while Lord Voldemort had access to the funds of some of the most prestigious magical families of England, possibly contributing to the disparity.

The study also found another interesting tidbit skeptics may attribute to the inability to donate more money: Harry Potter, for all intents and purposes, is a Democrat: “the Potters only gave to Democratic candidates, including Barack Obama and John Kerry, while the majority of the contributions from the Riddles went to Republican candidates.” While the results don’t show which Republicans Voldemort gave to, this does give way to a theory as to who exactly keeps funding Sen. David Vitter‘s reelection bids.

And then there’s this: American wizards are more likely than Muggles to support Republican Congressman Ron Paul. Aside from the bizarre discovery that “self-proclaimed wizards are becoming increasingly involved in politics,” it appears that the two known wizards donating to American political campaigns will only do so for candidates who share a name with Ronald Weasley, Harry’s best friend and (spoiler alert!) future brother-in-law. The other Wizard™-approved candidate? Rep. Ron Klein.

While it is highly unlikely that any part of this research will be used by voters in actually determining candidates, it is a fun thing to explore, though looking at their political contributions severely undermines Potter’s and Voldemort’s combined fundraising abilities– if Harry Potter and the Deathly Hallows Pt. II were a presidential candidate, it would have already raised more money than Barack Obama.