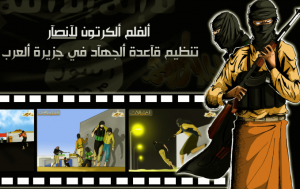 Remember when you used to watch Sunday morning cartoons? You know, the shows about superheroes who used their powers for good to defeat the forces of evil in a mere 22 minutes? Well, our enemies may have discovered this weapon of mass distraction, and are using it to brainwash future generations of jihadists.

According to Wired‘s Adam Rawnsley, the project is being developed by allies of al-Qaeda in the Arab Peninsula (AQAP). It was announced on a terrorist web forum (which is a thing that exists) from user “Abu al-Layth al-Yammani.” The cartoon, once it is in the final stages of development, will be sent to al-Malahim, AQAP’s media arm, to get their approval on the work. Here are the details of what we should expect from this veritable fountain of propaganda:

Yammani promises that it tells an “exciting story and clarifies truths like the weakness of some in their religion, defending the Prophet, the collaboration of rulers with the West, and other Islamic matters.” If the animated depiction of al-Qaida’s geopolitical narrative hasn’t gotten your adrenaline pumping already, then the “operations surrounding real events among the heroic deeds of the mujahids in the Peninsula of Muhammad, including incursions, clashes, and assassinations” should have you glued to the screen.

Now, this is just my opinion, but I don’t think children should be watching programs where people are assassinated. Some might say this could scare little children and not get the desired effect. But how could it NOT? I mean, take a look at this picture of the series’ protagonists. 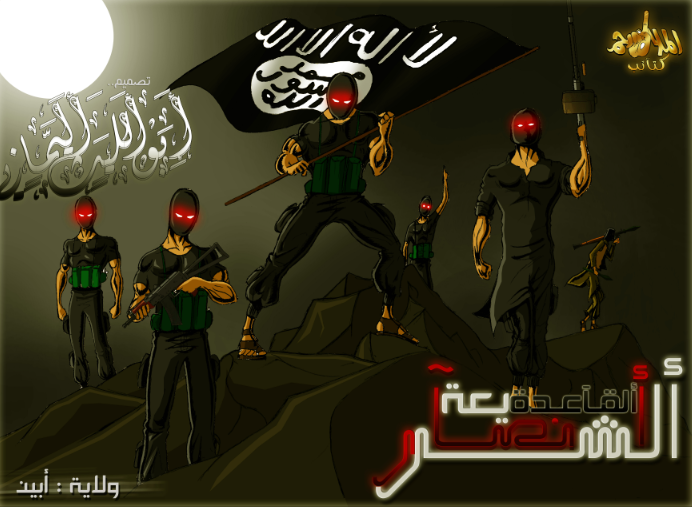 Now, there are several things wrong with this picture, but let’s focus on the glowing red eyes. That is pretty much the definition of a bad guy in most cartoons. Maybe when al-Qaeda was busy looking at popular Western cartoons for inspiration, they got the roles confused. “Hmm, if the Americans are the ones without glowing red eyes, we shall embrace the glowing red eyes! Glowing red eyes for everyone!” In fact, some users on the web forum have “complained they made the scarf-wearing fighters look too ‘scary’ for children”. Let me remind you this is a forum for jihadists. When you design an anti-American propaganda cartoon and users on a jihadist forum are going, “Dude, too far,” you need to tone it down.

According to Reuters, AQAP has been using the internet to advance the cause of al-Qaeda for years “by producing sophisticated Arab-language propaganda and a snazzy, teen magazine-style online publication called Inspire,” but their latest attempt may backfire because Muslim parents might see it as an attempt “to create divisions within families and to undermine the authority of parents.”

The blogger who first discovered the cartoons, Will McCants (a former senior adviser at the State Department) from the website Jihadica, has expressed doubts that the cartoon is real, and it very well may just be fan art created by some fan of al-Qaeda on the internet. But if this true, then there is very little chance of it working on young kids. Propaganda only works if you understand your target audience.

Childrens’ television is not very violent, but on those shows where violence is a staple, it’s combined with a dose of levity. Tom and Jerry is a good example of this. Hamas didn’t make terrorists their main characters, they used a Mickey Mouse ripoff to spread their propaganda.

Might we see a plush bin Laden lecturing children on the importance of bomb safety?

The cartoons do not depict Osama bin Laden, the al-Qaeda founder or the current leader Ayman al-Zawahiri.

McCants likens this al-Qaeda cartoon to a “much more disturbing version of Veggie Tales.” (Could you imagine Larry the Cucumber wearing a suicide vest?) The cute series about talking vegetables works because of the characters’ likability. Christian morals are taught through songs about God, kindness, and forgiveness, paired with silly nonsense like “I Love My Lips.” It’s preachy, but careful not to push it too much, because again, their target audience is children.

In fact, let me lay out some DOs and DONT’s for creating childrens’ cartoons.