O’Reilly, Stewart and Kurtz Team Up to Break Navel-Gazing Record

O’Reilly, Stewart and Kurtz Team Up to Break Navel-Gazing Record

How do you deal with a 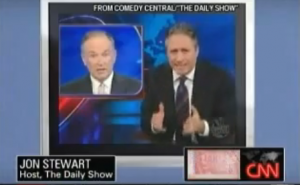 news slump? Engage in an ongoing debate about semantics with another TV Anchor in hopes that a respected media critic will cover it, then report on said critic taking the bait. If this sounds confusing, we’ll explain: Jon Stewart, Howard Kurtz and Bill O’Reilly all teamed up to set, what we feel to be, an all-time record for media navel-gazing. Hopefully by covering this, we too will be included in the record books.

So this is how it went down:

Hopefully now you can understand this Escher-style navel gazing, which appears to break the previous record co-owned by Tucker Carlson and Jon Stewart. But it’s not clear if the record will hold up, as O’Reilly’s claim that Stewart out quoted him out of context isn’t entirely correct.  What is the full quote of O’Reilly’s “loon” quote?

O’Reilly: There are the anti-Bush protesters in New York City. While most of these people have been peaceful, more than a thousand have been arrested and surveys show, many protesters are simply loons, calling for the destruction of the American system, calling for retreat in the face of terrorism. Here’s a bulletin for you Bush-haters: These protesters are not helping John Kerry.

O’Reilly: We were talking about the arrested protesters.

Actually, no he wasn’t. If one carefully examines the transcript, he was talking about the protesters who were surveyed — and that included all the protesters, not just those who were arrested.

Nonetheless we are pleased help you reader understand the back and forth, and are hoping in some way to keep the dialog going. That’s right, Mediaite is pleased to trump this exchange, by looking deeper into the media navel then ever before. You’re welcome.

PS – It would be great if some other Media Watchdog website blogged about this article, which we’d promise to re-blog about in return. Let’s keep it going!