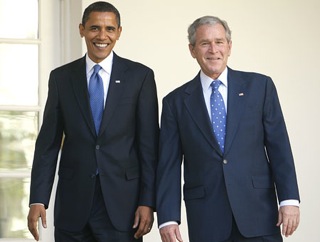 With Newt Gingrich‘s political life support system finally faltering this morning, the roller coaster of ideological frivolity that is the general election can begin in earnest now– in all its mommy-hating, dog-eating, slow-jamming glory. But before biting into all the delicious and philosophically unhealthy political junk food the campaigns throw our way, a reality check on the policies both candidates present the American people would serve voters well. Unfortunately for both campaigns, even a cursory look at the Barack Obama presidency illustrates the tale of an assertive, steely-willed neo-conservative: the exact opposite of what both President Obama and Mitt Romney are banking on the American people believing.

RELATED: Van Jones: Obama Let Tea Party ‘Set Him Up’ By Being ‘So Bipartisan’

Among the luckier turns of the Republican primary election for President Obama is that much of his opponents’ energy has focused on proving that Romney is something of a moderate, if not an all-out liberal, unfit for the mantle of the Republican Party. All the fanfare surrounding that accusation has created a smokescreen around the President’s policies which, taken at face value, seem far closer ideologically to what, say, Charles Krauthammer would want of him than Paul Krugman.

The capture and killing of Osama Bin Laden, without regard for the sovereignty of Pakistan is President Obama’s most overt conservative statement. The breathtaking account of how SEAL Team 6 broke into Bin Laden’s Abbottabad compound garnered praise from most, even in the unlikeliest corners– remember that Romney, then one of many forgettable Republican candidates, was taken to task by Bill O’Reilly for claiming the President was generally a failure. A minority of loyalist neo-conservatives, team players as they are, praised President Bush for his work keeping our facility in Guantánamo Bay open, with little regard for how easily other Democratic leaders could have neglected to violate Pakistan’s sovereignty or risk the wrath of an already volatile anti-American population in the Middle East. Those who choose to divert all the credit for this military victory to President Bush also neglect to note the fact that Guantánamo is still open, which is already a major divergence from both the Democratic Party and the Senator Barack Obama elected in 2008, who promised his first act as President would be to close the facility. They also ignore the courageous decision to violate Yemen’s sovereignty to take out al Qaeda operative Anwar al-Awlaki— a U.S. citizen– and the fact that the President has engaged in drone warfare so much he has actually had the opportunity to joke about it.

The War on Terror does not provide the only examples of how the President has adopted an assertive conservative foreign policy, however. For one, the entire Wikileaks saga and detainment of alleged leaker Bradley Manning is a product of the Obama administration– a detail that Glenn Greenwald’s blog at Salon deserves particular praise for not forgetting (in fact, the passion with which Greenwald has taken to attacking the President’s foreign policy these past four years should be a sign that maybe President Obama isn’t all that liberal). It is under this President that the TSA has adopted the intrusive national security measures libertarians have been condemning since their inception, all in the name of public safety (another topic the President has openly joked about). And then there is immigration.

Immigration reform often ranks among the most popular topics conservatives like to attack President Obama on– it is no secret that Arizona Governor Jan Brewer made her career on yelling at the President about it. The actual statistics on illegal immigration hardly paint the picture of a lax, complacent President regarding South American immigration however– under his watch, the United States has seen more deportations than any other President, nearly 400,000 in 2011. The push to deport, combined with the effects of a slow economy, have resulted in news this week that California, the most afflicted state regarding illegal immigrants, is for the first time in decades seeing a drop in illegal populations. According to the Pew Research Center (via LA Times), “the state’s share of the nation’s estimated 11.9 million undocumented migrants dropping to 22% from 42% in 1990.”

His ideological foes will undoubtedly bring up his domestic foibles to counter the President’s record of right-wing governance: the unwieldy and overbearing Obamacare (whose blueprint we have no one but Mitt Romney to thank for); his refusal to work with Congress on the days he must take on the job of Rep. Eric Cantor‘s babysitter. No doubt the President has wasted time, energy, and worst of all, money on some truly irredeemable efforts, from corporate bailouts to the national embarrassment that is Fast and Furious, a tragedy almost completely avoidable with the help of sensible (read: near nonexistent) drug laws. But all Presidents with an eye on the world will drop the ball domestically occasionally. President Richard Nixon had Watergate, President Ronald Reagan had a lethargic economy of his own, President George H.W. Bush’s most famous words will always be “read my lips.” His son straddled the country with No Child Left Behind and, even more unforgivably, started the ball rolling on corporate socialism. The latest conservative president in this line has Obamacare to his name.

President Obama’s is a clear record. Guantanamo Bay alive and kicking. Osama bin Laden rotting on the ocean floor (gone too are Muammar Gaddafi and Kim Jong-Il, though through little work of the President himself). Predator drones loom over the heads of any would-be terrorist the world over who dares defy our safety. Glenn Greenwald has been throwing a 24/7, four-year-long tantrum since last Inauguration Day. Make no mistake: this is true conservative leadership.

And so we arrive at a general election where the ideological tables have turned in ways that make the spirit of pom-pom-wielding sportslike team/party spirit, to say the least, murky. The Republican candidate’s flagship accomplishment in office—Romneycare— is a socialist health care policy and the Democratic candidate’s flagship accomplishment in office— violating Pakistan’s sovereignty to assassinate Osama Bin Laden— is an imperialist invasion. Where that leaves the nation is anyone’s guess, other than the obvious in the media: both sides’ ideologues twisting themselves into pretzels trying to convince their people that the other side’s guy is bad. Sean Hannity will continue to insist that President Obama has ties to the Black Panthers; Ed Schultz will continue to insist Romney has ties to Ted Nugent. Meanwhile, the oft-ignored purists on either side (like the aforementioned Greenwald) and those politicos who no longer have skin in the game (like former Reagan adviser Bruce Bartlett or, conversely, former President Jimmy Carter) continue to highlight the obvious discrepancies between these men’s reputations and their records.

One must necessarily harbor little hope that voters– with so little time on their hands in between the dreadful economy and their daily lives– will stop and notice the national political role reversal, and those who talk and write about politics for a living have in large part continued to root for their team no matter what the players do. As the vetting process continues for both candidates, however, the President’s record will come back to haunt or confuse him, as will Governor Romney’s, leaving partisans in the media little space to continue hiding the truth about one of the most conservative foreign policy doctrines in our lifetime.