Pastor: Gays Are Possessed by Stinky Demons Who Drive Pigs to Suicide

Pastor: Gays Are Possessed by Stinky Demons Who Drive Pigs to Suicide 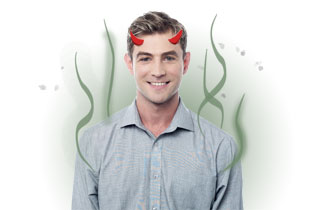 “Homosexuals are possessed by demons!” is an argument as old as, well, the Bible itself, but a pastor writing in Charisma News has an even better, even more definitive description of the types of demons possessing homosexuals: they are a “putrid-smelling demon that other demons don’t even like to hang around.”

“A genuine prophet of God told me that the Lord allowed him to smell this demon spirit, and he got sick to his stomach,” wrote Bert Farias, a pastor at Holy Fire Ministries. “And yet as humans, many embrace this demon. Yes, you heard me right: Being gay is demonic.”

Without telling us who the “genuine prophet of God” is (we wanna meet him!), he goes on:

There is an account in the Bible where Jesus casts 2,000 demons out of a man. The demons came out screaming and begged Jesus to send them into the pigs. The pigs didn’t want them, so they ran down a steep hill and were drowned in the sea. Pigs have more sense than some humans. Some people embrace homosexual demons, but the pigs would rather die than be possessed with demons.

Farias is referring to the story of Legion, in which a vast horde of demons were driven out of a man’s body by Jesus. But the point of Legion was that, quite literally, thousands of demons were possessing the guy. Who’s to say that the gay demon made the pigs drown themselves? Maybe the gluttony demons freaked the pigs out. (Pigs are made of bacon.) Or, you know, the thousands of other demons possessing the pigs?