Pat Sajak Would Like To Stop Talking About Race, Please 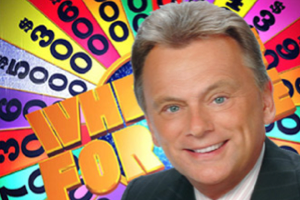 One of the things that keeps the political world interesting is that you never quite know who is going to drop by. Last Thursday, we got a cameo appearance by Wyclef Jean, now a bona fide Haitian presidential candidate. Yesterday, we got your grandma’s favorite game show host, Pat Sajak, analyzing race relations in America. He knows about these things, you see, because he deals with African American contestants on Wheel of Fortune all the time.

In an article hosted by the conservative blog/social network hybrid Ricochet (where he is apparently a regular contributor), Sajak writes about his experiences with race conversations, and how he finds that talking about race nowadays is difficult. In fact, it is so difficult, that it’s much harder than he remembers when he went to a 90% black high school in the 1960s. Back in the 1960s, there were practically no racial tensions at all!

Compare this to today, when Sajak can’t even make a harmless joke about what a bad rapper he is:

“On my game show recently, an African-American contestant mentioned that he could teach anyone to be a Hip-Hop singer. I leaned over to him and stage-whispered, ‘I’m sorry, but I’m hopelessly Caucasian.’ It was a joke on me and my lack of ‘hipness’ and my white bread image, but I found myself re-examining the line later. Was I engaging in stereotyping? Could my remarks have been offensive? Would viewers be uncomfortable with what I said? I decided it was a harmless (and somewhat amusing) little comment, but it was the fact I gave it any thought at all that troubled me.”

His point in noting that is, as he puts it, that the continued dialogue on race has made people so sensitive that it has incited even more tension than in the past. “At some point,” he argues, “we have to stop looking at everything through the prism of race,” and we will get to that point, he continues, “through evolution rather than legislation.”

That last point is rather strange. What legislation is Sajak referring to? It seemed initially that the problem was a cultural hypersensitivity– too many beer summits, too many “teachable moments.” It seems that he was referring to government involvement in the topic of race in general, though the point was lost as soon as he shared his experiences hosting his longtime program. But that’s the beauty of America, isn’t it? Everyone‘s personal experiences matter, and everyone is entitled to a say. Most of those says are pedestrian and go unnoticed; others, like this one, give us some insight into the political considerations one must take while running a word game-based program. Sure, there are major logical and historical issues in his post, but it’s a nice reminder that sometimes things are best left to professionals who deal with punditry on a regular basis– we can’t quite imagine Sean Hannity being very patient when old ladies can’t figure out the obvious missing vowel, either.