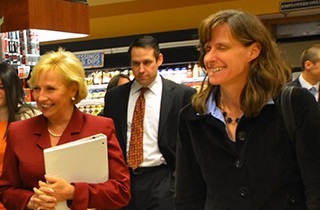 This weekend, Hoboken Mayor Dawn Zimmer(D-NJ) dropped the blockbuster allegation that New Jersey Lt. Governor Kim Guadagno, in a private conversation during a visit to a Hoboken ShopRite store, explicitly tied her city’s Hurricane Sandy relief requests to a real estate development deal. Lt. Gov. Guadagno strongly denied the allegations Monday morning, and at the time, touted the visit on the State of New Jersey’s website.

That event was a visit to the Hoboken ShopRite store owned by Lawrence Inserra. Aside from her word, and the status of her Sandy aid requests, Mayor Zimmer’s claim rests heavily on those diary entries she made at the time. Here are some photos of Mayor Zimmer and Lt. Governor Guadagno at the event where Zimmer says she was extorted: