‘Phuc Dat’: Of Course Viral Story About Facebook Profile Was a Hoax 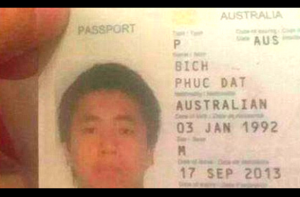 In the latest edition of “No Sh*t, Sherlock,” the man behind last week’s viral story about Facebook repeatedly deleting his account because of his legal name turned out to be an Internet joke gone wild.

Despite what Phuc Dat Bich told the world on Friday, Joe Carr used his newfound Facebook profile to reveal the truth about the viral hoax (and his real name).

“But wait,” you’re probably thinking. “Didn’t he provide an Australian passport as evidence?”

Sure, because a photo of a “passport” with “Australia” and the name “Bich, Phuc Dat” on it are immediately viable sources of validity.

Needless to say, Carr used his latest post to eviscerate the media and thank everyone who intentionally and inadvertently helped to advance his “simple prank.”

Do you remember the story; The boy who cried wolf?

Imagine that boy grew up into a mischievous man with 21st century technology at his finger tips.

I’ve never believed it’s necessary for it to be mandatory to have your entire name to be published on social media. People should be free to use any name they desire. Facebook needs to understand that it is utterly impossible to legitimise a place where there will always be pranksters and tricksters.

What started as a joke between friends, became a prank that made a fool out of the media and brought out the best in the people who reached out to me. It didn’t bring out the anger and darkness that we often see on the internet, but it brought a levity and humanity in a time we need it most.

Out of this ordeal I’ve concluded not to trust the credibility of the media, it’s twisted by the hungry journalists who mask the truth.

I just want those who are reading this to take a step back and reflect what the media have claimed about me.

“What was his parents thinking?”

It goes to show that an average joe like myself can con the the biggest news sources with ease.

I want to acknowledge the supportive individuals who have encouraged those with truly interesting and idiosyncratic names that populate in different cultures. Hate and discrimination will remain if we continue to be so closed minded.

To those who do have culturally specific and spectacular names, ignore the ignorance in those who may try to put you down. Continue being the best person you can be and make your mark on the world in whatever way you can – even if it is a simple prank.

Yours sincerely,
Joe Carr aka PDB

The Internet is a cesspool of despair. I hope it never goes away.