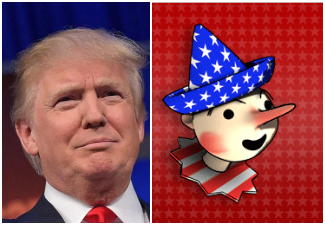 Like pretty much else in this race for the White House as it pertains to Donald Trump, this Muslims-celebrating-in-Jersey-after-9/11-story dominating the narrative for days is a fascinating study in media process.

Before we continue, a little background from the author: I was in New York on 9/11. I lived in Jersey (still do) at the time. I, like the rest of the country, watched the news non-stop for days, weeks after the attacks. And while I do vividly remember images coming out of the Middle East of people openly celebrating the attacks (that one older woman with big glasses snapping her hands in the air and smiling is the clearest in my mind), I don’t remember seeing any reports on any of the local New York network affiliates on celebrations in Jersey City.

No matter…if such footage did exist, those networks/channels would have safely archived it. And lest anyone believe said footage would be purposely suppressed to make Trump look bad (as Team Trump is ridiculously claiming). Because if it did exist, that might attract a few eyeballs their way today if they re-aired it, right? And if word got out that it was being hidden or was destroyed (as we enter the Oliver Stone phase of our column), heads would roll while that outlet’s credibility would be damaged basically forever. In other words, throw out the ridiculous conspiracies now…

But here’s where the story gets bizarre: Trump is demanding an apology from the Washington Post on Twitter (below) while mocking them at campaign stops and in interviews every chance he gets.

Via @washingtonpost 9/18/01. I want an apology! Many people have tweeted that I am right! https://t.co/CpsMxs54qv pic.twitter.com/wrDEhXJlvR

And guess what? He has every right to, and he’s why: There was a report on September 18, 2001 in the Post that stated celebrations were occurring in New Jersey (Jersey City), as Trump insists. Of course, that same report doesn’t ever mention thousands in terms of the number of people celebrating (that obviously would have attracted national network attention considering Jersey City is just one subway (PATH) stop away from downtown Manhattan right across the Hudson River). However, as you’ll see below, it’s still enough for Trump to show his supporters—who are proving to be extremely loyal—that this is yet another example of a dishonest media trying to take him down.

In Jersey City, within hours of two jetliners’ plowing into the World Trade Center, law enforcement authorities detained and questioned a number of people who were allegedly seen celebrating the attacks and holding tailgate-style parties on rooftops while they watched the devastation on the other side of the river.

The truly bizarre part? Washington Post senior fact-checker (Glenn Kessler) wrote this three days ago in his story titled: Trump’s outrageous claim that ‘thousands’ of New Jersey Muslims celebrated the 9/11 attacks. In it, Kessler goes through in condescending fashion how wrong Trump was on the claim, stating “There were some reports of celebrations overseas, in Muslim countries, but nothing that we can find involving the Arab populations of New Jersey.” But then, in the irony of ironies, the fact-checker is forced to add this update to his original fact-check after readers spent about 30 seconds on Google and fact-checked him:

Update: Some readers have tweeted to The Fact Checker a Washington Post article from Sept. 18, 2001, as evidence of Trump’s claim. The article, which appeared on page 6, described FBI probes in northern New Jersey after the attacks, saying in the 15th paragraph that “law enforcement authorities detained and questioned a number of people who were allegedly seen celebrating the attacks and holding tailgate-style parties on rooftops while they watched the devastation on the other side of the river.”

Of course, “a number of people” obviously does not equal “thousands” — and “allegedly” indicates there is no video footage or other proof that celebrations actually took place. Recall that Trump claimed he saw this on television — and that it was “well covered at the time.” This newspaper article appeared days later.

The reporters who wrote the story do not recall whether the allegations were ever confirmed. “I certainly do not remember anyone saying that thousands or even hundreds of people were celebrating,” said Serge Kovaleski, one of the reporters. “That was not the case, as best as I can remember.”​

OK, so why weren’t the allegations ever confirmed? Because that’s one hell of an allegation to make without at least following up, right? And why even write about celebrations at all? One reporter of the 9/18 article–Serge Kovaleski–only says he does not remember “thousands or even hundreds” of people were celebrating, but doesn’t deny celebrations in some capacity didn’t take place. Again, no one is defending Trump as being completely vindicated here, but it’s a whole bowl of wrong that Kessler somehow failed to include the Post’s own story on Muslims celebrating in Jersey City. Even worse, he doesn’t even apologize for missing something his readers didn’t. It just looks so bad…

And again, Trump’s total on the number of Muslims celebrating is way off, that’s a given. But Kessler now looks like as much of a jackass as Trump does with his claim of “thousands” for not doing simple homework. That’s his job and he’s been doing it for years, and now is forced to defend himself and the paper after readers did a simple Google search on the matter. Of course… to still give Trump Four Pinocchios (the highest level of fabrication on the Post’s scale) without acknowledging its own original report is effing comical (later reducing to 2-3 would have been more appropriate and an admission of the oversight by Kessler). Remember, this isn’t some partisan blog or amateur operation, it’s the effing Washington Post…the paper that only brought down, you know…Nixon.

For those who believe this 9/11 controversy will take down Trump—who again is leading in polls in the only three states that matter right now (Iowa, New Hampshire and South Carolina), as well as nationally—think again. If the Washington Post 9/18/2001 story doesn’t exist, Trump has no leg to stand on. He might even be forced to actually admit a mistake, which simply is not in his DNA. Instead, WaPo provides him more than enough ammo to muddy the waters and turn this situation into both a game of semantics around the number of people celebrating, and again allows Trump supporters to question media credibility as a whole (via the Post’s reporter and fact checker really dropping the ball in “defending” its reporting).

The twists and turns continue along the rollercoaster road to 2016. Donald Trump is at the center of it all once again.

Many in the media thought this would finally be the turning point that took him down. But thanks to the Washington Post and its bumbling, stumbling and fumbling, the GOP frontrunner gets an easy out. And maybe somehow even gets another bounce in the polls…