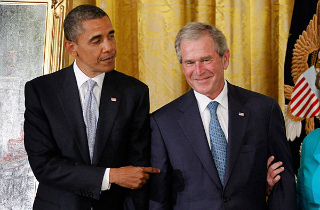 Last week the Federal Court of Appeals in Washington D.C. ignited a new round of predictable, hypocritical mudslinging with a ruling which declared President Obama‘s “recess appointments” unconstitutional.

Recess appointments of top federal officials were envisioned by the Constitution, and Presidents since George Washington have used them, some more regularly than others. (Interestingly, President Washington appointed a judge as Chief Justice during a congressional recess in 1795; the Senate later rejected the nomination and the judge attempted suicide.)

Article Two Section Two of the Constitution reads: “The President shall have Power to fill up all Vacancies that may happen during the Recess of the Senate, by granting Commissions which shall expire at the End of their next Session.” This exception was not created so Presidents could ignore the consent role of the Senate, but rather based on the practical realities of the Senate schedule. The legal question here: what does it mean to be “in recess”?

Knowing that Republicans in the Senate objected, President Obama appointed Richard Cordray to be Director of the Consumer Financial Protection Bureau and three others to the National Labor Relations Board when the Senate was not officially “in session.” Republicans had attempted to thwart these sorts of appointments by ensuring the Senate was never technically in “recess” (as Democrats had done to President Bush) by holding “pro forma” sessions every few days where a handful of members, usually those who live nearby, meet for a few minutes or even seconds and bang a gavel or two.

President Obama ignored what he viewed as the sham sessions and made the appointments anyway under the assumption that these sessions were not legally enforceable. The court in Noel Canning v. NLRB disagreed, unanimously ruling that “an interpretation of ‘the Recess’ that permits the President to decide when the Senate is in recess would demolish the checks and balances inherent in the advice-and-consent requirement.” Many Democrats blasted the opinion, while most Republicans celebrated it as a limitation on President Obama’s future ability to install controversial nominees

All to be expected.

The reality, of course, is that no matter what one thinks of Presidential recess appointments, these days they are often a clear and unambiguous effort to circumvent the Constitutional requirement of Senate approval. From John Bolton and William H. Pryor Jr. under President Bush to Richard F. Griffin Jr. and Richard Cordray under President Obama, the appointments were made while the Senate was on a break (officially or not is the subject of dispute), and as a result of the controversy surrounding the candidates, not on some urgent need to move forward with the appointment. It is clearly being used as a Constitutional end run.

Partisans bicker over who was worse: President Bush used them more often and with higher level positions, Democrats say, while Republicans argue President Obama took it to a new level by making these appointments while the Senate remained officially in “session”. Still others debate whether President Obama has been hypocritical based on his response to President Bush appointing Bolton.

As a practical matter, of course, the use of recess appointments to avoid the necessity of seeking Senate confirmation is always more than a bit mischievous. While it is true that all recess appointments are not created equal – some far more radical than others, the fundamental purpose behind the controversial ones remains the same: to avoid allowing the Senate to weigh in. So one would hope that while the politicians repeat the hackneyed defenses or attacks, the best in the media would call it what it is in all these cases: a ruse. Alas, this case demonstrates that even our most venerable institutions like The New York Times and Wall Street Journal are too often as politicized as the public officials they cover– and mock.

The Wall Street Journal regularly supported President Bush’s right to use the recess appointments in 2005, saying: “Mr. Bush now faces crocodile shouts of outrage for having bypassed the Senate, but the appointment is an entirely appropriate use of his constitutional authority to staff the government.”

Yet when President Obama utilized it, they coined it Contempt For Congress, writing: “Eager to pick a fight with Congress as part of his re-election campaign, Mr. Obama did the Constitutional equivalent of sticking a thumb in its eye and hitting below the belt. He installed Richard Cordray as the first chief of the Consumer Financial Protection Bureau and named three new members to the National Labor Relations Board. He did so even though the Senate was in pro forma session after the new Congress convened this week.”

But even the Journal editors offer a hint that they don’t quite buy the legal distinction of the “Pro Forma” Senate: “Some lawyers we respect argue that a pro forma session isn’t a real Congressional session, and that’s certainly worth debating.”

Later, they present the true nature of their objection which isn’t legal, but purely political:

“As Ohio Attorney General, Mr. Cordray was tight with the tort bar and launched a barrage of national lawsuits worthy of Eliot Spitzer. His new job might be a nice populist springboard for running for Ohio Governor, should he choose to do so. Look for Mr. Cordray to announce new and controversial rules or enforcement actions, oh, say, around Labor Day.”

They continued, “These appointments are brazen enough that they have the smell of a deliberate, and politically motivated, provocation… (U)nder this Administration, the supposedly nonpartisan NLRB has become a partisan arm of Big Labor, and that will probably continue this election year.”

At least the Journal admitted they had previously supported recess appointments and rest their distinction on a legal technicality that they agree is “worth debating.” The New York Times makes no such reference or acknowledgment and, consequently, engage in what is even more clearly rank hypocrisy.

In 2006, their editorial page argued: “It is disturbing that President Bush has exhibited a grandiose vision of executive power that leaves little room for public debate, the concerns of the minority party or the supervisory powers of the courts. But it is just plain baffling to watch him take the same regal attitude toward a Congress in which his party holds solid majorities in both houses. Seizing the opportunity presented by the Congressional holiday break, Mr. Bush announced 17 recess appointments–a constitutional gimmick…”

What was gimmick for President Bush, according to the Times, is cheer-worthy under President Obama. On January 4, the editorial page argued, “Nearly six months after it opened its doors, the Consumer Financial Protection Bureau finally has a director, after President Obama’s recess appointment of Richard Cordray… Mr. Obama also appointed three new and qualified members to the National Labor Relations Board… Announcing the appointments, Mr. Obama also asserted a welcome new credo: ‘When Congress refuses to act, and as a result, hurts our economy and puts our people at risk, then I have an obligation as president to do what I can without them.’ Hear. Hear.”

The Times‘ effort at distinguishing Democrats using precisely the same technique is even more tortured:

“Although Democrats also used “pro forma” sessions for this purpose under President George W. Bush, Republicans have blocked Mr. Obama’s appointments at a far higher rate, and they have gone much further by trying to shut down executive agencies through use of the filibuster.”

They did it worse! The Times may be right about that, but how does that change the underlying appropriateness of the maneuver? We almost expect political leaders to switch positions when convenient, but the best in media (in theory) are supposed to be holding them accountable, not holding their water.

We often hear about the divisive and partisan nature of cable news, but it seems our most hallowed news organizations are no better at placing principle over politics.