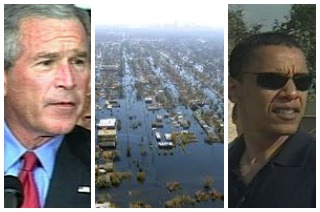 A poll from the Democratic firm Public Policy Polling released on Wednesday shows that Louisiana Republicans are split as to whether to blame George W. Bush or Barack Obama for the government’s failure to provide adequate support for the state in the wake of 2005’s Hurricane Katrina. While 28 percent of Pelican State Republicans blame Bush for the post-Katrina failures, 29 percent blame Obama who was a freshman U.S. Senator at the time of the storm. 44 percent of GOP voters are unsure who to blame.

“Bush was criticized heavily when he did not immediately return to Washington from his vacation in Texas after the storm had reached landfall,” Talking Points Memo, who as provided the PPP poll “exclusively,” reported. “The government was also slow to provide relief aid and Michael Brown, then-director of the Federal Emergency Management Agency (FEMA), admitted in a televised interview that he learned that many of the storm’s victims at the New Orleans Convention Center were without food and water well after the situation had been reported in the press.”