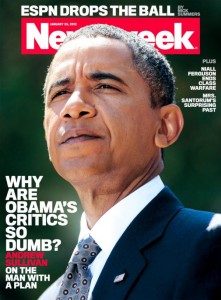 Glenn Reynolds of the popular conservative blog Instapundit (home of the “Instalanche,” the nickname given to the huge amounts of traffic an Instapundit link can drive) made an unfortunate observation about the Newsweek cover that has so many conservative bloggers in a lather. Rather than focus on Andrew Sullivan‘s titular question “Why are Obama’s critics so dumb,” Reynolds picks on the cover photo, and the President’s “liverish lips.”

IN WALKS THE VILLAGE IDIOT, AND HIS FACE IS ALL AGLOW. He’s been up all night listening to Obama’s radio.

But the Obama photo on Newsweek’s cover will do him more harm than all the desparate sycophancy in the text. He looks terrible, and surprisingly like Jimmy Carter, even down to the downturned liverish lips and incipient jowls. I’m amazed they went with that one. Perhaps the staff is of two minds. Andrew Sullivan, of course, has reason for gratitude.

Although I’m not a frequent Insty reader, I’ve never known Glenn Reynolds to exhibit any racist tendencies, so I’m going to give him the benefit of the doubt that he didn’t know “liver-lips” is a deep-dish racial slur.

Even so, given all that’s going on in this country, it’s more than a little bit strange that Reynolds has chosen to fixate on President Obama’s lips.

Redstate’s Caleb Howe also zeroed in on Newsweek‘s cover, but to considerably funnier (yes, there are funny conservatives) effect:

You can check them out here, but for me, the funniest thing will be getting Caleb to autograph the Newsweek cover for President Obama’s second inauguration.