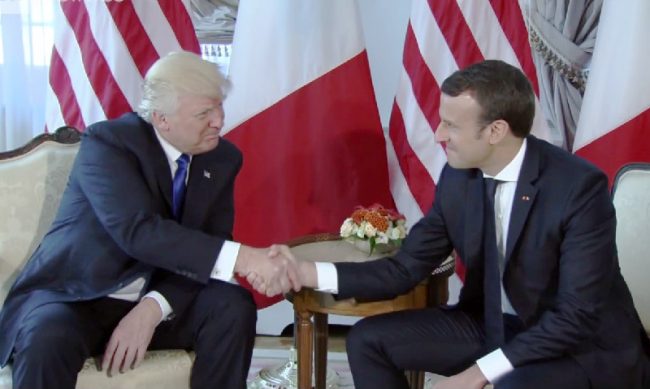 The French will welcome President Trump on the Champs-Elysées this July 14 for their Bastille Day celebration.

According to a White House press release Wednesday, Trump accepted an invitation French President Emmanuel Macron offered over the phone Tuesday when Macron and Trump agreed on a “joint response” in the event of another chemical attack in Syria.

Bastille Day, or la Fête nationale in France, is the day the French celebrate the storming of the Bastille, the day the French Revolution took a turn in their favor. The festivities famously include a military parade down the Champs-Elysées in Paris in the morning, in front of the French President, French officials and all invited foreign guests.

“President Trump looks forward to reaffirming America’s strong ties of friendship with France, to celebrating this important day with the French people, and to commemorating the 100th anniversary of America’s entry into World War 1,” the release said. “The two leaders will further build on strong counter-terrorism cooperation and economic partnership between the two countries, and they will discuss many other issues of mutual concern.”

This invitation comes not even a month after Trump pulled out of the Paris Climate Deal, the first global pact aimed at reducing emissions of planet-warming greenhouse gases. Trump said he had to put Americans first and that he was not elected to represent the citizens of Paris.

Macron did not agree with the decision, “I do respect this decision but I do think it is an actual mistake both for the US and for our planet,” he said, and then continued to mock Trump’s slogan by saying, “Wherever we live, whoever we are, we all share the same responsibility: make our planet great again.”