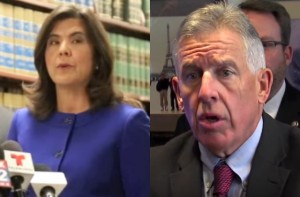 The fatal shootings of Tamir Rice and Laquan McDonald were clearly on the minds of voters in Cleveland and Chicago last night, with the prosecutors in both those cases rejected in both of their primaries.

Two police officers involved in the fatal shooting of the 12-year-old Rice were not charged by a grand jury. When Cuyahoga County prosecutor McGinty announced this back in December, he said his review of the case concluded it was a “perfect storm of human error” that showed no fault on the part of the officers.

Rice’s family accused him of “abusing and manipulating” the grand jury process, and last night he lost the Democratic primary in his reelection race to challenger Mike O’Malley. (There’s no Republican nominee, so O’Malley is his official successor.)

Meanwhile, over in Chicago, Cook County State’s Attorney Anita Alvarez had pushed back months ago after being roundly criticized for her handling of the shooting of Laquan McDonald. He was shot over a dozen times. She brought him up on charges, but the problem is the shooting happened in 2014 and people were more than a little outraged at how long it took for video to even be released.

The McDonald shooting became a significant point of outrage against Alvarez over the course of the campaign, and last night she lost the Democratic primary to challenger Kim Foxx. Foxx will go on to face a Republican opponent in the general election.

Both races a sign, perhaps, of how race and criminal justice could play significant roles in other 2016 races.