Rand Paul Lays Into Colleagues For ‘Bullying,’ ‘Berating’ Apple Over Taxes: ‘Congress Should Be On Trial’
video

Rand Paul Lays Into Colleagues For ‘Bullying,’ ‘Berating’ Apple Over Taxes: ‘Congress Should Be On Trial’ 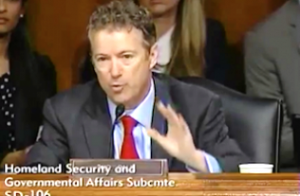 Sen. Rand Paul (R-KY) chastised his colleagues on Tuesday, during in opening remarks at Senate hearing examining tech giant Apple’s avoiding tens of billions of dollars in taxes. Instead of “bullying” one the country’s best “success stories,” Paul suggested the Senate panel bring in a “giant mirror.” Congress, not Apple, should be on trial, he charged.

Yesterday, reports said a Senate panel found that Apple “avoided billions in taxes in the United States and around the world through a web of subsidiaries”…

Congressional investigators found that some of Apple’s subsidiaries had no employees and were largely run by top officials from the company’s headquarters in Cupertino, Calif. But by officially locating them in places like Ireland, Apple was able to, in effect, make them stateless — exempt from taxes, record-keeping laws and the need for the subsidiaries to even file tax returns anywhere in the world.

“Frankly, I’m offended by the tone and tenor of this hearing,” he said in his opening statement. “I’m offended by a $4 trillion government bullying, berating, and badgering one of America’s greatest success stories.”

Paul chided the “spectacle” of bringing in executives from a company that did nothing illegal — a fact he said the committee admits.

The senator’s recommendation was bringing in a “giant mirror” so Congress could see that the problem is of their own creation. The poorly crafted tax code is what drives companies overseas, so the solution would be to realize that ours is “set too high.”

Repeatedly touting Apple as a success story, and a job creator, Paul railed against the “abominable” hearing — arguing instead for “better, fairer, and more competitive” tax legislation.

Paul further hammered home his point on Twitter, where he took another jab at his colleagues, contending, “Apple has done more to enrich people’s lives than politicians will ever do.”

Watch his remarks below: