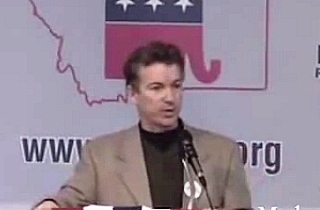 While giving a variety of speeches between 2007 and 2009, Paul committed the deadly sin often in the context of discussing why the GOP needs to learn fiscal discipline; and that his father, then-primary candidate Ron Paul truly understands this fact.

Aside from the obvious trolling (the headline is “Rand Paul Says Jimmy Carter Was Better on the Budget Than Ronald Reagan“), Mother Jones makes the point that these quotes contradict the senator’s recent invocations of the Gipper in 2016 warmup speeches.

To be clear, however, Rand was not praising Jimmy Carter‘s fiscal policies — that’s just the clever Mother Jones spin. Rather, he was lamenting how Reagan’s deficits shot up above and beyond Carter’s, a fact many libertarians bring up when knocking the Republican Party’s unearned self-assuredness on fiscal matters.

All of these statements are true. The questions then become: Despite the factual and political accuracy of Paul’s lamentations about Reagan-era fiscal policy, will conservatives reflexively outrage about this? Will it become fodder for the likes of Ted Cruz and Rick Santorum to pledge their undying love for Reagan’s ghost, in contrast to that turncoat Rand?

If any of the above does happen, it will be more of the same from conservatives. Overlooking the party’s 1980s failings is a key component of Reagan idolatry, and, sadly, it would prove they still have no interest in thinking about economics in a truly principled manner.

Libertarians have long criticized Reagan-era policies. The great Sheldon Richman chronicled Reagan’s “sad legacy” in 1988, noting that “the number of free-market achievements by the administration are so few that they can be counted on one hand—with fingers left over.” He bemoaned the nominal 60% increase in government spending, “thanks mainly to Reagan’s requested budgets,” and the doubled budgets of the bugaboo Departments of Education and Energy. Richman also pointed out Reagan’s various protectionist trade measures.

Yes, Reagan had to contend with a Democratic Congress, but many of the above policies were directly supported and/or proposed by the president. There’s simply no way around it; and Republicans would be better off listening to Rand Paul’s tough words rather than dismiss them as blasphemy.

Watch the video below, via Mother Jones: