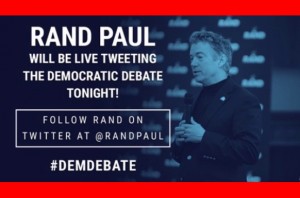 It’s no secret that Rand Paul has had to get creative when it comes to social media to make up for his poll numbers; last week, after Fox Business left the Kentucky Senator off of the mainstage debate, Paul resolved instead of hold a digital town hall of his own. And again on Sunday, he took to Twitter for a self-described “tweetstorm” to air his thoughts on the Democratic Debate.

The lashing of Libertarian linguists is nearly 45-Tweets in length and spans several hours, and the GOP candidate for President used the opportunity to share original video and weigh in on responses from Hillary Clinton, Bernie Sanders, and Martin O’Malley.

The opening Tweet went out 9 minutes before the start of the debate, and featured a fancy graphic of the Senator rocking a mock turtle neck, noting “It’s almost go time!”:

Before the first question was even asked on-stage, Paul opened with a zinger aimed squarely at Vermont Senator Bernie Sanders. The “Democratic-Socialist” Senator polling second in the Democratic race for President is often identified (particular in conservative circles) simple as a Socialist:

9:03 p.m., and Paul’s Twitter fingers are already warmed up, firing off a quick barb at the typical questioning for past Republican debates:

Are they going to ask the Democrats tons of questions about Donald Trump or is that just for us? #DemDebate

He found a way to fit in a version of his favorite government-so-small-you-can-hardly-see-it Libertarian-ish point of view on this dig at Clinton:

.@HillaryClinton wants to cut healthcare costs. Try getting government out of the way and let competition work. #DemDebate

And how about these jokes! 12 minutes in and Rand Paul casually laid in this yuk-yuk aimed at his Socialist friend Sanders. I gotta be honest, this is a pretty good slam, tying in Sanders’ rating with the NRA to his goals for American education:

.@BernieSanders just bragged about getting a D- grade. And he wants to fix education. #DemDebate

Here are a few other stand-outs from his Finnegan’s Wake-length social media brain dump Sunday night:

First Commercial break. Maybe I should have skipped the #DemDebate too? https://t.co/59z2nWp0L3

Anyone else think that #DemDebate halftime show needed a band?

He found the opportunity for a quick dig at Bathroomgate, but at least had the decency to refrain from calling it “disgusting”:

Another break already? I hope everyone makes it back to from the bathroom in time #DemDebate

By a certain hour of the night however, it seemed as if Rand Paul was out-Tweeting himself, offering up this confused take on the debate’s questioning:

I think the Democrats are taking questions from cartoons. I don’t know what that means, I’m just pointing it out. #DemDebate

And finally, with all the vim and vigor of the anti-Federalists, Rand Paul triumphantly Tweeted his final Tweet of the night, with one final swipe at the entire event:

Thanks for joining my latest tweetstorm. I hope you enjoyed it more than I enjoyed the #DemDebate! Learn more: https://t.co/lpzLQBXXC5

We here at Mediaite have taken into account all of the Tweets comprising Dr. Paul’s Sunday night showing, and this was definitely one of the most entertaining live-tweeting events we’ve seen yet during the campaign. The Senator managed legitimate hilarity while still arguing his talking points in a digital forum, separating himself from both the Democratic candidates on stage as well as his GOP rivals. We give Rand Paul’s “tweetstorm” a 4.5 out of 5 Bill of Rights rating: