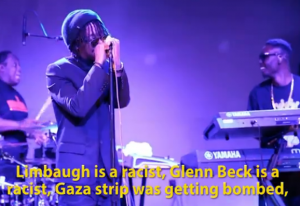 Rapper Lupe Fiasco was booked to headline the StartUp RockOn concert, a private inauguration event that took place on Sunday. And it appears things didn’t quite go as planned, with the rapper (who’s criticized the president in the past) reportedly asked to the leave the stage, following a politically charged performance.

RELATED: Bill O’Reilly To Rapper Lupe Fiasco: ‘President Obama Is Not A Terrorist’ 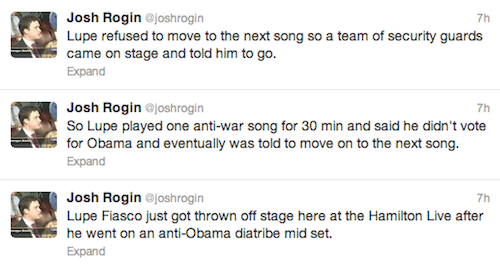 As did CNN’s Matt Dornic: 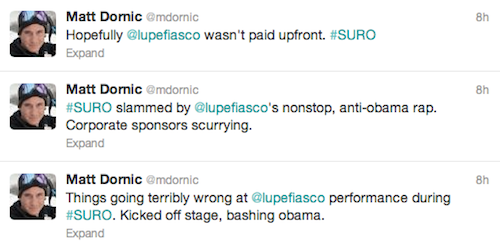 Video posted online by NowThisNews shows Lupe performing the song “Words I Never Said,” just before he left the stage. “Limbaugh is a racist, Glenn Beck is a racist,” he raps, “Gaza Strip was getting bombed, Obama didn’t say shit. That’s why I ain’t vote for him, next one either.”

HyperVocal, which was one of the companies involved with the event, responded to the incident on Twitter and went on to post an official statement. “We are staunch supporters of free speech,” the statement said, going on to note that the decision “was not about his opinions.”

Lupe Fiasco performed at this private event, and as you may have read, he left the stage earlier than we had planned. But Lupe Fiasco was not “kicked off stage” for an “anti-Obama rant.” We are staunch supporters of free speech, and free political speech. This was not about his opinions. Instead, after a bizarrely repetitive, jarring performance that left the crowd vocally dissatisfied, organizers decided to move on to the next act.

The party continued as planned, and we celebrated the announcement of CodeNow’s winning the Grant Challenge. CodeNow is a non-profit startup based in Washington DC that teaches “underrepresented high school students basic skills in computer programming.”

Video below, via NowThisNews: