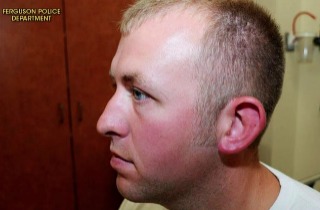 The St. Louis County Prosecutor’s Office has put out all the evidence and testimony tonight in the Ferguson grand jury case, including testimony from Officer Darren Wilson himself.

Wilson explained that he first saw Brown and Dorian Johnson when they were walking down the middle of the road. He said, “As he [Brown] came around to the mirror I said, ‘Well, what’s wrong with the sidewalk?’ Brown then replied… ‘Fuck what you have to say.'”

Wilson then reportedly saw the Cigarillos, realized he must have been the suspect who stole from a convenience store he heard about in his police car, and angled the vehicle to cut him off. He opened his car door and beckoned Brown over. This is what Wilson said happened next:

“As I’m opening the door he turns, faces me, looks at me and says, ‘What the fuck are you going to do about it”, and shuts my door, slammed it shut. I haven’t even got it open enough to get my leg out, it was only a few inches.”

Wilson said Brown was attempting to overpower him, and after telling him to “get the fuck back,” that’s when they had their physical altercation inside his car. When he reached for the gun, Wilson told the grand jury, “I said, ‘Get back or I’m going to shoot you.’ He immediately grabs my gun and says, ‘You are too much of a pussy to shoot me.'”

He grabbed his gun back and it went off twice in the car. When Brown started running, Wilson chased him. And this is what Wilson said he was facing when Brown stopped:

“I tell him to get on the ground… He turns, and when he looked at me, he made like a grunting, like aggravated sound and he starts, he turns and he’s coming back towards me. His first step is coming towards me, he kind of does like a stutter step to start running. When he does that, his left hand goes in a fist and goes to his side, his right one goes under his shirt in his waistband and he starts running at me.”

Wilson fired at Brown multiple times, but as he said, “it looked like he was almost bulking up to run through the shots, like it was making him mad that I’m shooting at him.”

He said he didn’t remember how many times he shot, but once he saw “the aggression was gone” in Brown’s face, he knew “the threat was stopped.”

Wilson was asked why he didn’t wait for backup. He said, “I thought I would be able to just stall until someone got there… I wanted to be out of the car, that way if I need to run I can run.”

You can read Wilson’s full testimony below, starting at page 195: