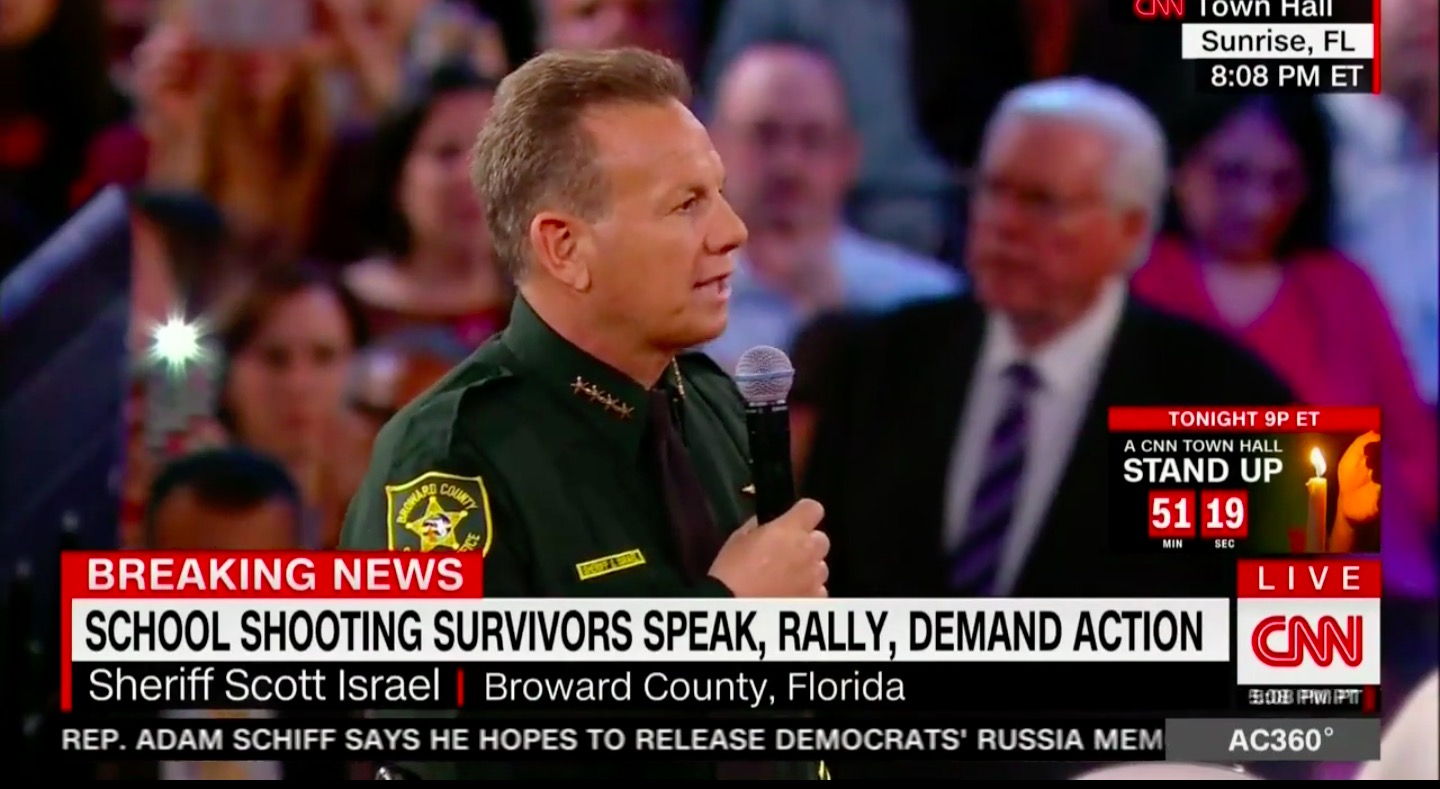 After he chastised NRA spokeswoman Dana Loesch at the CNN Town Hall over gun control, numerous developments regarding his office have surfaced. First, Israel shared to the public that an armed on-campus deputy, Officer Scot Peterson, waited outside Marjory Stoneman Douglas High School for four minutes before going in (the entire shooting reportedly took place within six minutes). Then it was reported that his office was warned about the shooter back in November but was never documented in their files. And earlier this evening, it was reported that the sheriff’s office had three additional armed deputies outside the high school but hid behind their vehicles.

Conservative commentator Ben Shapiro kicked off the trend with #ResignSheriffIsrael.

It seems to me that Broward County Sheriff Scott Israel deserves a hashtag far more than the NRA. So #ResignSheriffIsrael it is.

Scott Israel lied to an entire national audience by suggesting his department had done everything to protect the kids of Parkland. #ResignSheriffIsrael

CNN reports that no less than FOUR Broward County sheriff’s deputies stood outside during a massacre. #ResignSheriffIsrael

Not long after, the hashtag gained traction, becoming one of the biggest trends on Twitters. others have chimed in, including the NRA.

.@DLoesch holds @browardsheriff Scott Israel accountable: “This is the 8th tragedy where we have seen numerous tips that have been reported and red flags. Are we talking about prevention or not?” #ResignSheriffIsrael pic.twitter.com/bO063yVAGx

You blamed @DLoesch. You blamed President @RealDonaldTrump. You blamed an inanimate object. But it was the Russia obsessed FBI. Its was your officers. And it was you. #ResignSheriffIsrael.

Absolutely ridiculous that Sheriff Israel lectured @DLoesch for not standing up for the students of Marjory Stoneman Douglas High School when 4 of his fellow officers failed to stand up for the students and engage the shooter. #ResignSheriffIsrael pic.twitter.com/ecnvZpWHs1

How dare you lie to the American people and put the blame on law-abiding gun owners. #ResignSheriffIsrael

It is f**king astounding how quick everyone at CNN wants to "forgive" Sheriff Israel, who happens to be a Democrat, but want to burn @DLoesch. Only one of them was in charge of people who allowed students to die and it was not Dana. #ResignSheriffIsrael.

Well finally there's an activist hashtag on Twitter worth propagating: #ResignSheriffIsrael. Step down, you have failed your constituents in the worst imaginable way. Take ownership like a responsible person should. Leave.