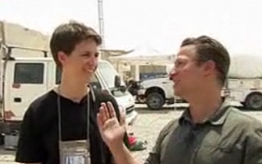 Fans of NBC’s Richard Engel will probably be familiar with the story of how Engel arrived in Iraq at the before the 2003 invasion and last night, as part of MSNBC’s coverage of the departing combat troops from Iraq, Engel told it again to Rachel Maddow.

It’s worth a listen, particularly considering we are now in week two of wall-to-wall coverage of the ginned up controversy over the Lower Manhattan mosque it’s good to be reminded of how hard member of the media worked to get access to a dangerous and complicated situation to report the story back to the American public. Engel tells Maddow:

I came in under dubious circumstances. I was given a human shield vision which I had to buy under the corrupt regime of Saddam Hussein. I remember this. They said as long as Americans are invading let’s bring in civilians to be shields. I got this visa and I was supposed to chain myself to a plant and say, don’t bomb. The Americans are here. Love and peace. I said, that’s exactly what I want to do…You still had to pay a few hundred dollars, a little bribes here and there. Little gifts i should call them.

I was living in Egypt and the region already at the time. This is in 2002 for about 7 as a 1/2 years. So the invasion was about to begin. I’d been living in the region for quite some time. I spoke Arabic. This is the way I’ve got to go. This is going to be the game-changing story. I’ve got this human shield visa. Then I didn’t chain myself to a power plant or anything for the love of Saddam. I got into this country and then disappeared.

That was a few months before the invasion and I just stayed. I stayed in Baghdad. I was living in people’s houses. people protected me and gave me shelter. I stayed in Iraq for the next 5 1/2, 6 years. I was working for everybody, BBC and QBC and free-lancing and started working for NBC full time pretty much immediately following the fallback

Watch the video below.