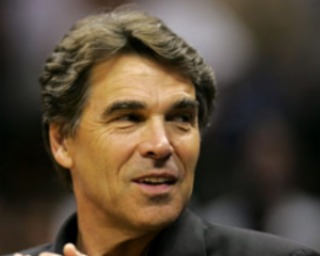 Being a campaigning politician is tricky. You want to be sure you speak to your base without alienating other potential voters. You need to make sure that your speeches are clear, concise, and memorable, without risking misinterpretation. And you want to make sure to use strong rhetoric and make firm promises to show that you are a real and competent leader, without making it seem like you’d sign off on the murder of, say, the Chairman of the Federal Reserve, Ben Bernanke. Such is the balance GOP presidential hopeful Rick Perry found himself tipping during his speech last night at an Iowa fundraiser.

The Texas Governor, you see, was asked what he would do with the Federal Reserve. And this was his reply:

If this guy prints more money between now and the election, I dunno what y’all would do to him in Iowa but we would treat him pretty ugly down in Texas. Printing more money to play politics at this particular time in American history is almost treasonous in my opinion.

Now, “treat him pretty ugly” is a vague statement. It can mean a number of things. But adding that printing additional money at this time is “almost treasonous” is less open to interpretation, and, as such, some in the media (such as the folks at Think Progress, Gawker and The Atlantic Wire) have pointed out that treason is a capital offense. Coupled with his statement about treating Benanke “ugly,” it wouldn’t be terribly far-fetched to interpret Perry’s response as one advocating the death of Bernanke for treasonous activity. If that sounds insane well, then. Perhaps politicians should take care to keep their rhetoric less inflamed and hyperbolic and take care to avoid provocative words like “treasonous.”

As The Atlantic Wire points out however, ABC News offers the expanded “version” of Perry’s response, which, while impassioned, is decidedly less inflammatory:

We’ve already tried this. All it’s going to be doing is devaluing the dollar in your pocket and we cannot afford that. We have to learn the lessons of the past three years that they’ve been devastating. The President of the United States has conducted an experiment on the American economy for almost the last three years, and it has gone tragically wrong and we need to send him a clear message in November of 2012 that new leadership is coming.

The focus of the aforementioned news outlets — on Perry’s use of the word “treasonous,” without offering the full quote — goes to show two things: That media outlets will pounce on words and actions of politicians that make for the most dramatic reading and the more controversial story, and that politicians need to take care and represent themselves clearly, so that they say just what they mean and can be able to defend their words.

Perry chose to use the term “treasonous.” He didn’t have to use it, but he did. And maybe he was exaggerating to make a point, sure. But that word is so heated, so loaded with meaning, and so threatening that it is not unjustified or off-base to go with the interpretation that he is advocating something that, to use his own word, is decidedly “ugly.”

You can take a look at video of Perry’s response for yourselves, courtesy of Think Progress: