Robert Downey Jr. Tells Howard Stern Why He Walked Out on ‘Bottom-Feeding Muckraker’ 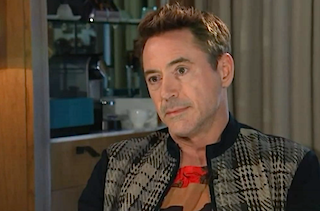 Last week, Robert Downey Jr.’s extensive media tour to promote Avengers: Age of Ultron took him to Britain’s Channel 4, where he walked out mid-interview with Krishnan Guru-Murthy, who dared to ask him about his past drug use and time in prison. Today, Howard Stern dared to ask the actor why he decided to cut that interview short.

“I just wish I’d left sooner,” Downey Jr. told Stern. “I’m one of those guys where I’m always kind of assuming the social decorum is in play and that we’re promoting a superhero movie, a lot of kids are going to see it,” “This has nothing to do with your creepy, dark agenda that I’m feeling, all of a sudden like ashamed and obligated to accomodate your weirdo shit.”

Downey Jr. described himself as “completely unevolved when it comes to simple boundaries” and wished he had been able to say, “You know what? You’re weirding me out. You’re a bottom-feeding muckraker.”

“The assumption is that there’s a button that because you’ve sat down there, you’re going to be scrutinized like you’re a kiddie fiddler who’s running for mayor,” he continued. “What I have to do in the future is I just have to give myself permission to say, ‘That is more than likely a syphilitic parasite, and I need to distance myself from this clown.’ Otherwise, I’m probably going to put hands on somebody, and then there’s a real story.”

As Downey Jr. mentioned to Stern, Guru-Murthy has a history of rubbing celebrities the wrong way, as he did with Quentin Tarantino back in 2013. But instead of walking out, Tarantino spent several minutes berating the interviewer, saying, “I’m not your slave and you’re not my master. You can’t make me dance to your tune. I’m not your monkey.” Ultimately, the director declared, “I’m shutting your butt down!”