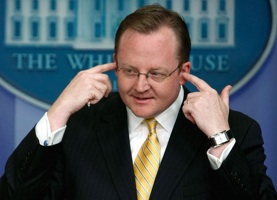 Gibbs immediately quipped that he’d be more concerned for CNN, or for Erickson’s wife, before he gave a lengthier answer about the “lunacy” of census paranoia.

Q Robert, on the Census, Erick Erickson, a commentator for CNN, a couple of days ago, he said he was not going to fill out his Census form, and if a Census worker came to the door, he said he would “pull out my wife’s shotgun and see how that little twerp likes being scared at the door.” So my question is, do those remarks concern the White House? And are there any —

MR. GIBBS: It should concern CNN — probably first and foremost. Probably concerns his wife as well.

Q Any thoughts about protection for Census workers?

MR. GIBBS: Well, I think there are a lot of people that get on cable TV and say stuff so that people will quote it back to other people.

Obviously the Census determines the representation you have in what we call representative democracy. I think it’s why somebody like Karl Rove, who obviously I and others in this administration have disagreed with for going on many years, understands that the lunacy of ripping up your Census form or not sending it in or, God forbid, the remarkably crazy remarks of somebody that would threaten somebody simply trying to ensure that they’re adequately represented in this country. These days it never ceases to amaze you — and usually it’s only trumped by what somebody will knowingly say tomorrow about — I think it was Lincoln who said, “Better to be thought a fool than to open one’s mouth and remove all doubt.” I think that would be my advice.

To be fair to Erickson, he wasn’t referring to the census itself, but rather, the Census Bureau’s supplemental American Community Survey. On the census, Erickson takes the much more reasonable position that no firearms of any kind need to be deployed. You won’t hear the lamestream media reporting that, though, will you?

To my mind, this is of a piece with the recent hysterics over whether President Obama ought to be “calling out” people like Rush Limbaugh and Glenn Beck. When you’ve got people saying that answering the census could get you “rounded up,” the White House is not only justified in calling it out, it is their responsibility to do so. As long as they remember that “lunacy” is a constitutional right, there’s nothing wrong with reassuring those who might actually believe it.