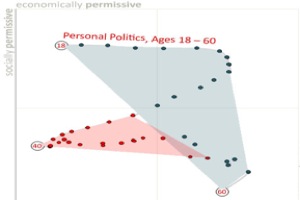 Move over Frank Luntz: online dating site OK Cupid has released an extensive survey on American party identification using their members as a sample group. For the most part, the results are nothing new: people tend to grow conservative as they age; views on abortion fall on party lines, etc. The study, surveying more than 100,000 people, presents a grim conclusion for the Democrats’ political diversity, but a bright future for accurate online polling.

OK Cupid’s statistics crew (which, given that the site was founded by mathematicians, is fairly formidable) concludes that a bigger variety of opinions within a party renders it increasingly powerless as they try to cater to their internal political spectrum. This is bad news for the Democrats, as their research shows that there is a large chunk of the party who self-identify as economically and socially conservative. Compare this to the Republicans, who almost completely into the socially conservative, economically liberal category. The study concludes:

Unlike in many things, size here is a liability. Yes, a political party that’s this wide-open is probably a more intellectually stimulating organization to be a part of, and it has a lot more potential power. But bigger base is also just that many more competing viewpoints Democratic politicians must cater to and that many more different viewpoints in play among the actual elected officials themselves.

The introduction of a dating website to the statistics community sounds like another nail in the coffin of objective research. OK Cupid has no responsibility to be objective. The New York Times reports that OK Cupid has about 1.1 million active users, but for the purposes of this survey, the website’s sample size is 172,853 people. Because it has a potential data set of one million people, it could pick and choose subjects to generate the results their agenda require in a much simpler fashion than, say, Daily Kos pollsters could. Not to mention that the group is self-selecting. The type of person that would have a profile on a dating site is probably a bit more socially liberal than the average.

On the other hand, their sample size is two orders of magnitude more than the 4-digit numbers common at organizations like Gallup and Rasmussen. That’s about an extra 99,000 people.

Not that OK Cupid is the new Gallup, but its foray into political research presents an exciting possibility for the future of public polling and statistics. Social networking websites have a built-in survey audience answering potential questions voluntarily– imagine the power of harnessing that through a website that can escape the potential of being self-selecting more than OK Cupid, like Facebook. Facebook already lets people identify politically and list interests– information that could very well give an accurate pulse of the nation– and boasts 400 million users around the world. Of course, the issue with politics on Facebook is that it’s possible to put almost anything in the “political views” box with impunity (for example, my current political views on Facebook are “Rod Blagojevich”), but with the audience there, the details of how to collect accurate information– via radio buttons and not open-ended categories, for example– can be worked out later.