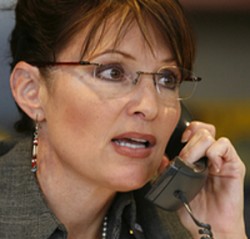 Actually, it’s more like what version of the English language is Sarah Palin using, because it’s not one most of us are familiar with, as anyone who has been required to transcribe a Palin speech is painfully aware. McWhorter, however, sees a strange problem that goes far beyond Palin’s habit of being “folksy,” something that he finds little fault with. At one point he compares her language skills to that of a toddler.

Rather, Palin is given to meandering phraseology of a kind suggesting someone more commenting on impressions as they enter and leave her head rather than constructing insights about them. Or at least, insights that go beyond the bare-bones essentials of human cognition — an entity (i.e. something) and a predicate (i.e. something about it).
[…]
This reminds me of toddlers who speak from inside their own experience in a related way: they will come up to you and comment about something said by a neighbor you’ve never met, or recount to you the plot of an episode of a TV show they have no way of knowing you’ve ever heard of. Palin strings her words together as if she were doing it for herself — meanings float by, and she translates them into syntax in whatever way works, regardless of how other people making public statements do it.

McWhorter’s conclusion is especially damning…and not just to Palin:

As such, Sarah Palin can talk, basically, like a child and be lionized by a robust number of perfectly intelligent people as an avatar of American culture. And linguistically, let’s face it: she is.