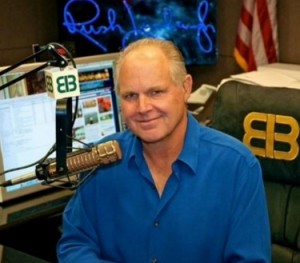 Right-wing radio giant Rush Limbaugh claimed, on his radio show today, that President Obama “plagiarized” a column that Rush had written in 1988 during a portion of his speech before the United Nations general assembly today. Limbaugh accused the President of cribbing the line “Peace does not mean the absence of war” from him “verbatim.”

As is so often the case, though, Rush is horribly, horribly wrong. Obama’s actual quote, though, hews closely to a source that may (or may not) surprise his supporters.

Give Limbaugh credit, though, he does cop to a haphazard writing process that resulted in his “35 Undeniable Truths” column way back in 1988, but he gets President Obama’s quote wrong:

Now, before I get to what the President actually said today, it’s worth noting that Limbaugh’s quote is hardly original. In fact, it dates back to 17th century Dutch philosopher Baruch (I’m not kidding) Spinoza, who said, “Peace is not an absence of war, it is a virtue, a state of mind, a disposition for benevolence, confidence, justice.”

Rush can hardly be accused of “plagiarism,” though, as variations on this theme are common throughout history. Rush’s list is, itself, a blunt satire of Buddhism’s Four Noble Truths, which is fitting, since Limbaugh’s quote is also rather similar to one from the current Dalai Lama: “Peace, in the sense of the absence of war, is of little value to someone who is dying of hunger or cold.”

Barack Obama’s speech before the UN General Assembly, though, contained the following quote, which, while similar to Rush’s (and Baruch’s), is definitely not verbatim: (transcript via email from The White House, emphasis mine)

The men and women who built this institution understood that peace is more than just the absence of war. A lasting peace — for nations and for individuals — depends on a sense of justice and opportunity, of dignity and freedom. It depends on struggle and sacrifice, on compromise, and on a sense of common humanity.

That quote sounds a lot more like this quote:

“Peace is more than just the absence of war. True peace is justice, true peace is freedom. And true peace dictates the recognition of human rights.”

The source of that quote, of course, was Ronald Reagan.

Really, though, these are all variations on a theme that can be “plagiarized” in the same sense that a knock-knock joke can.