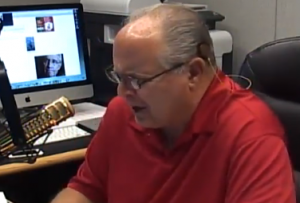 Back in September, Rush Limbaugh talked about consensual sex on his radio show and said, “How many of you guys, in your own experience with women, have learned that ‘no’ means ‘yes,’ if you know how to spot it?” He did go on to add, “Let me tell you something, in this modern world, that is simply not tolerated. People aren’t even gonna try to understand that one.”

Those remarks, of course, came under some intense fire, and even ended up being used by the Democratic Congressional Campaign Committee in a fundraising email. DCCC Chair Steve Israel wrote that Limbaugh “should be taken off the air immediately.”

And now Limbaugh is threatening legal action, according to TheBlaze, against the DCCC for defamation. In a letter, Limbaugh’s attorney accuses the DCCC of “intentionally disseminat[ing] demonstrably false statements concerning Rush Limbaugh in a concerted effort to harm Mr. Limbaugh.”

And a spokesman for the conservative radio host goes even further:

“To lie about Rush Limbaugh’s words as a fundraising method, under the color of authority of the Democratic Party, is a ‘tactic’ that is disrespectful to the general public, and to the twenty million people that choose to listen to Rush each week. And the Members of Congress who stood to gain from these false claims represent many of the small businesses across America that they deliberately interfered with, in furtherance of rankly partisan objectives.”

Update- 4:29 p.m. EST: The DCCC has responded in an email to Politico:

“While Rush Limbaugh is an expert in outrageous, inaccurate and defamatory speech, this attack on the DCCC is as outlandish as his original statement about women. The DCCC has not received any correspondence from Mr. Limbaugh or his attorney. If they actually send such a letter, rather than a press release, we will review it and respond accordingly.”

You can listen to Limbaugh’s original comments in context here, via The Rush Limbaugh Show: