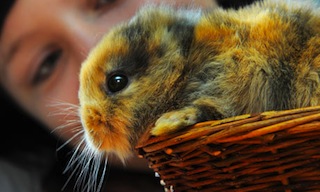 Hey, guys, screw you. No, I mean it. Yesterday, while everyone at Mediaite was reading fun stories about comedians giving ambush journalists the business and Glenn Beck fighting Chris Matthews, this writer was spending the entire day getting his computer fixed. But that’s fine. It’s a new day now. And, today, I’m getting my revenge the only way I know how; by bringing you the saddest story that has ever existed. Ever.

Ladies and gentlemen, let me tell you about the demise of Til, the ill-fated baby bunny.

Til was born just a few, short weeks ago. Unfortunately, he was born with a birth defect. Fortunately, this birth defect made him even cuter! Unfortunately, it meant that he didn’t have any ears. Fortunately, the fact that he was the most adorable thing ever made him a huge celebrity in his home of Germany! And he was all over the country’s newspapers! And the zoo he lived at was going to have a big press conference for him! And he was going to be sitting pretty for the rest of his adorable bunny life!

Unfortunately, that life was cut a tad short when a TV cameraman there for the press conference accidentally stepped on him. And killed him.

“The cameraman told Bild newspaper he hadn’t seen Til, who had buried himself in hay, when he took the fateful step back on Wednesday.

Ha! Take that, everyone! I hope reading this story was as painful to you as two separate hourlong trips to the Apple Store and four separate phone calls to tech support were for me!