Scarborough Fires Back at Zucker: He’s Got an ‘Obsession’ with Morning Joe

Scarborough Fires Back at Zucker: He’s Got an ‘Obsession’ with Morning Joe 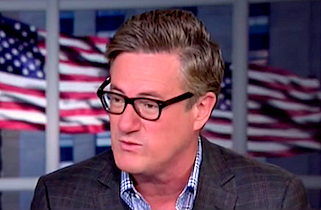 CNN president Jeff Zucker took a few shots at rival networks, saying Fox is “further out of the news business” than they are, and jabbing at Joe Scarborough by saying, “It’s probably about time to start getting your résumé ready.”

Zucker was referring to how CNN’s New Day has been catching up to Morning Joe in the ratings and laughed at Scarborough for touting how the “influencers” are watching his show.

Well, in a lengthy statement to Politico’s “On Media” blog, Scarborough fired back, saying “Jeff’s continued obsession with Morning Joe is fun to watch.”

Scarborought brought up how CNN took out a full-page New York Times ad in January saying at the top, “Sorry, Joe, while you were leaning forward, we were moving ahead!”

Scarborough snarked that Zucker could have just as easily sent an email and said of the “résumé” dig, “no such luck.”

And then he really went off:

“More people have watched ‘Morning Joe’ than CNN for 5 straight years. As the political season heats up, I expect that winning streak to rise to 6. It is also a matter of record that Morning Joe sets the agenda for politicians, the press and other influencers every morning from the White House, to Capitol Hill to media offices nationwide. Oh yeah. Morning Joe makes MSNBC a lot of money.”

“The fact the network president of CNN Worldwide is so obsessed with a morning talk show host proves the point by itself that Morning Joe remains the news show that matters most to influencers,” Scarborough continued. “What is even more humorous than Jeff’s Ahab-like obsession with me is that Jeff knows personally members of his executive team and own family watch Morning Joe every day. He also knows that being the most influential news show in cable drives up subscription fees for our network in a way that shrinks the significance of a few wins in a single demo. Morning Joe matters to people who run the world and I guess that still drives Jeff crazy.”