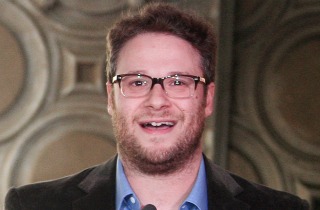 In case you’re not up-to-date on the latest Thing To Be Outraged About, here’s a quick recap: Seth Rogen and Michael Moore tweeted some things in relation to the movie American Sniper that people didn’t like. In Moore’s case, it was an observation about how cowardly snipers can be. In Rogen’s case, it was about how the film reminded him of the Nazi propaganda film in Inglourious Basterds.

There was some outrage about it, and Rogen clarified on Twitter Monday that he wasn’t comparing the film about Chris Kyle to Nazi propaganda; the former just reminded him of the Basterds short film.

Well, apparently, no one noticed that clarification, because the Rogen pile-on hasn’t stopped. Whoopi Goldberg scolded Rogen on The View for not showing the film and America’s veterans enough respect. Country singers like Craig Morgan and Blake Shelton expressed their disgust with his sentiments. Kid Rock went so far as to say, “Seth Rogen, your uncle probably molested you.”

And then there was this tweet from Dean Cain:

@Sethrogen Seth…I like your films, but right now, I wanna kick your ass. Chris is an American Hero. Period. Go to war. Then we'll talk.

And so, with the intended hope of finally putting the outrage to rest, Rogen issued a statement tonight further clarifying the tweet. He said he only made the observation because “they both involved plots about the most lethal of snipers.”

Regarding the suggestion he’s anti-veteran, Rogen points out his own grandfather was a veteran. Nevertheless, he apologized if anyone was offended by his tweet, though he did also insist any political meaning gleaned from his tweet was a reach:

My comment about the movie was not meant to have any political implications. Any political meaning was ascribed to my comment by news commentary.

Rogen tweeted the full statement out tonight, along with a response to Kid Rock:

I truly hope this clears things up: pic.twitter.com/1lLM4cA5je

And what's super weird is that @KidRock IS my uncle.